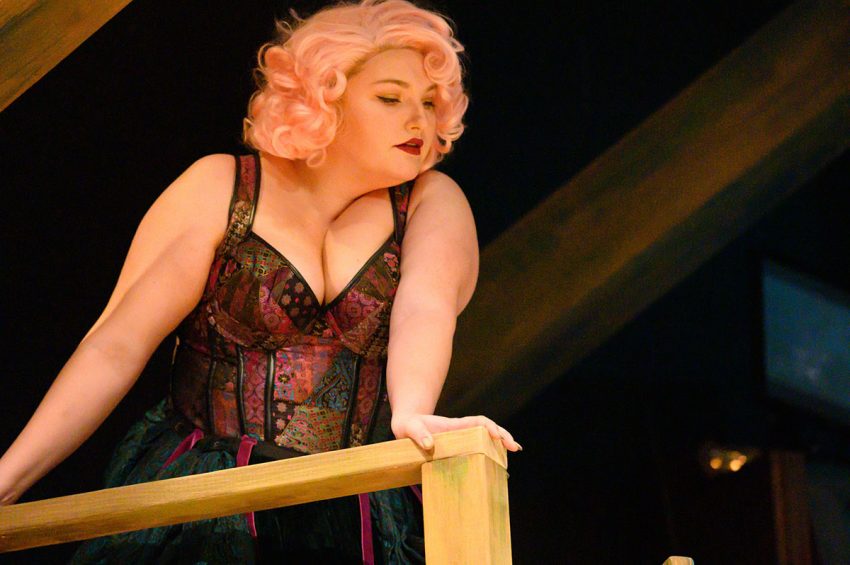 Caryl Churchill Wonders, “Who Are the Witches, Now?”

At Shotgun Players, the feminist fury of Caryl Churchill’s “Vinegar Tom” cuts through the air like a knife. It’s staggering how current her 1976 play about witches feels in 2019. The spirited music, vibrant choreography, and passionate performances rev up a high-octane show from start to finish.

After witnessing the cruelties and horrors of a 17th century witch hunt, I’m starting to think that the president is getting off a little too easily.

While the cast and crew boast no true witches—so far as we know—there is undeniably magic onstage. Thrilling stage designer Nina Ball fashions a gorgeous wooden set, combining the rustic old Globe, with the rough trappings of the peasantry. Multiple levels provide a playground for the actors. Up top, a live band led by Daniel Alley provides boisterous accompaniment for Churchill’s biting lyrics.

Wearing bright red and orange burlesque silks, women stalk the upper levels of the stage; while below, paranoia seeps into the minds of 17th century villagers. These women act as muses, punctuating scenes with witty songs like, “Oh, the country’s what it is / Because the family’s what it is / Because the wife is what she is to her man.” They lampoon the hypocrisy of the god-fearing villagers.

Director Ariel Craft and choreographer Natalie Greene pull off a tour de force of dynamic staging. From the very first scene, each moment makes compelling use of the multi-layered set. Leering down from the upper level, a man in black (impressive Dov Hassan) claims to be the devil. He addresses an unknown woman (evocative Megan Trout), always keeping her below him. We feel a deep sense of dread at the striking visual.

Although he is the sole male in a large cast of women, we constantly feel the crushing presence of the patriarchy. Churchill points out that witches may have gone out of fashion, but the oppression of women certainly has not. Our muses cry out “It’s blacks and it’s women, and often it’s Jews / We’d all be quite happy if they’d go away.” We know that powerful men always find excuses to put down anyone they deem outsiders.

All the actors bring an infectious passion to their roles, like kind, somber Sam Jackson. Jackson’s Ellen, a “healing witch,” adds sparks of sardonic wit, as she offers shamanistic help to the villagers.

Megan Trout brings down the house as an accused witch who delivers a chilling monologue. Trout’s Alice wishes she had magic powers to make the men pay. We all applaud, burning with furious empathy, trying to conjure our own vindictive powers.

“Vinegar Tom” succeeds in reclaiming witchcraft from the hands of evil men in power, who still try to co-opt the term. Without a doubt, my favorite show of the year.