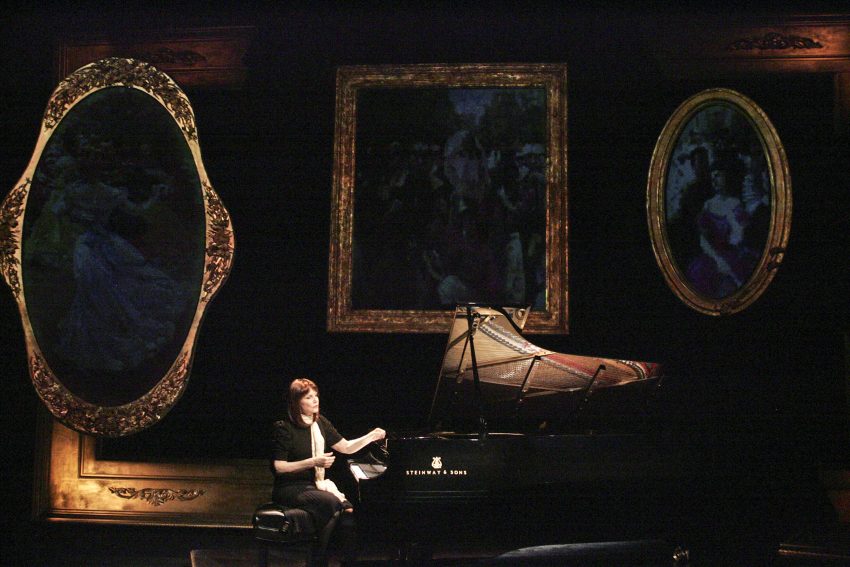 Lisa, a passionate fourteen year old, gets a lucky ticket on the “children’s train”–the Kindertransport–from Vienna to London. Along with other Jewish children, she must leave her beloved parents and two loving sisters behind in Vienna.

At TheatreWorks Silicon Valley, her daughter, Mona, recounts Lisa’s story. Mona, a third generation pianist, plays the Mozart and Beethoven she learned from her mother. Between piano lessons, Lisa tells her daughter about the harrowing escape from Vienna, as war descends.

Alone onstage, the elegant Mona combines beautiful classical music with her mother’s suspenseful story. Under her hands, the piano also tells a story of pain, fear, and survival. Thousands of children were saved on these trains until the Nazi’s shut them down.

While Lisa’s music tethers us to the past, it also becomes an escape, a way of survival for Lisa. Her talent and her practice take her all the way to the famed Royal Academy of Music in London–an heroic journey.

As she practices Bach and Chopin in the overcrowded London orphanage in Willesden Lane, Lisa prepares for her audition at the Royal Academy. She captivates her audience of over 20 displaced children, bringing hope into their lives. Lisa fulfills her lifelong dream of performing the beloved Grieg Piano Concerto.

In this pivotal moment, she is reunited with her missing sisters, after months of searching endlessly for them after the war has ended. A woman who never gave up on her dreams and teaches us that anything is possible when we continue working towards our passions regardless of obstacles.

A glossy black piano stands in the center of the vast stage and oversized bronze Victorian picture frames float above. Inside those frames we see a moving time capsule of family portraits, dance halls, and train stations. The music and the stories force us to come face the horrors of Nazi occupation Europe and the bombing in London.

With all these moving pictures and resounding music, Mona herself rivets our attention. When she delicately lifts her wrist before a crescendo, her breathtaking music fills our hearts.

I listen starstruck as Mona narrates her mother’s adventures. Multi-faceted Mona transforms herself into Lisa lost in London. Her mother works in a factory, making military uniforms by day.

Lisa Jura is forced to grow up fast; yet she retains a love for life. Her resilience is unwavering. Lisa not only survives but flourishes when the odds are stacked against her.

“The Pianist of Willesden Lane” magically combines magnificent music and expert storytelling. Adapted and directed by Maestro Hershey Felder, Mona’s musical memoir engraves itself into our minds and hearts. Mona’s mother’s story is as immediate as today–a beautiful show to be savored again and again.