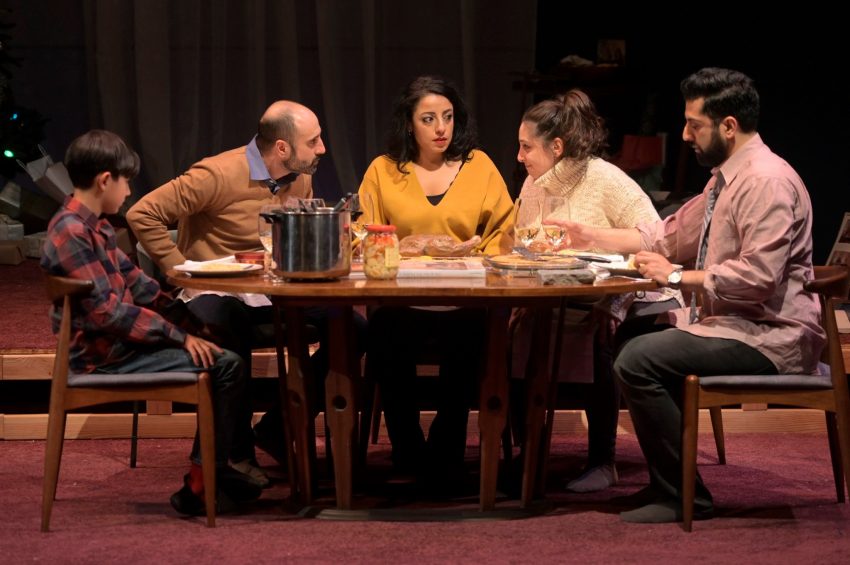 “Noura” confronts the destruction of war and the hardship of building new lives. Noura (amazing Denmo Ibrahim), an Iraqui refugee, stands outside her New York apartment in the falling snow on Christmas Eve.  Listening to “the loudest silence I have ever heard,” Noura remembers her mother on a snowy evening in Mosul, before the U.S. invaded Iraq.

Ibrahim’s Noura embodies the anguish of U.S. bombs bursting in her homeland, decimating families and friends.  After she takes refuge in the invading U.S., she lives with that torment. Playwright Heather Raffo helps us empathize with the tortured Noura.

Scenic designer Adam Rigg has given her a barely furnished and claustrophobic New York  apartment.  Her husband Tareq (brilliant Mattico David) exclaims, “We don’t even have a couch!” Family passports with their new Americanized names—Nora, Tim, and Alex—lie next to Noura’s scattered architectural drawings. She wants to build a new kind of home.

We feel Noura’s enthusiasm as she unfolds her plans for new Iraqui-style communal houses.  She wants the multi-family houses and central garden to replace her memories of rubble and death in Iraq.

Her moods fluctuate. She reflects in silence and darkness. We hear her thoughts whispering aloud about her Iraqi heritage.  Sound Designer Nehan Yesil effectively employs overhead speakers to echo her concealed thoughts.

Conversations become louder, faster, and harder to follow as the family interrupts with holiday excitement and disagreements. While Noura rejects her present, Tareq embraces America: “I feel safe for the first time in my life.” In Iraq, he was a surgeon—but here, he can only work in Emergency Rooms.

The Holiday sours, and Noura hears her inner voice again, but now it’s only gibberish.

Old-fashioned Noura is horrified that Maryam has no father for her child and no plans! Noura shoots accusatory questions at Maryam, driving her out—as if the Virgin Mary were denied sanctuary. “She would have been murdered in Mosul,” Noura’s inner voice snarls.

On Christmas day, Noura and Tareq expose secrets hidden for 26 years Like bombs exploding in Mosul, their words shatter their marriage.

Their argument builds to rage. Their fiery jabs fly until Noura collapses. We feel her exhaustion at each moment.

Raffo’s “Noura” vividly depicts the immobilizing ambivalence that immigrants feel when they are forced to flee from their homes.  Their families must flee that corruption, crime, poverty, or worse–ethnic cleansing or invasion.

The superb acting deserves a standing ovation. Ibrahim and David’s emotions carry us to wild, unknown places—familiar only to those who have survived war but lost their homes. Worthwhile theater for every American.