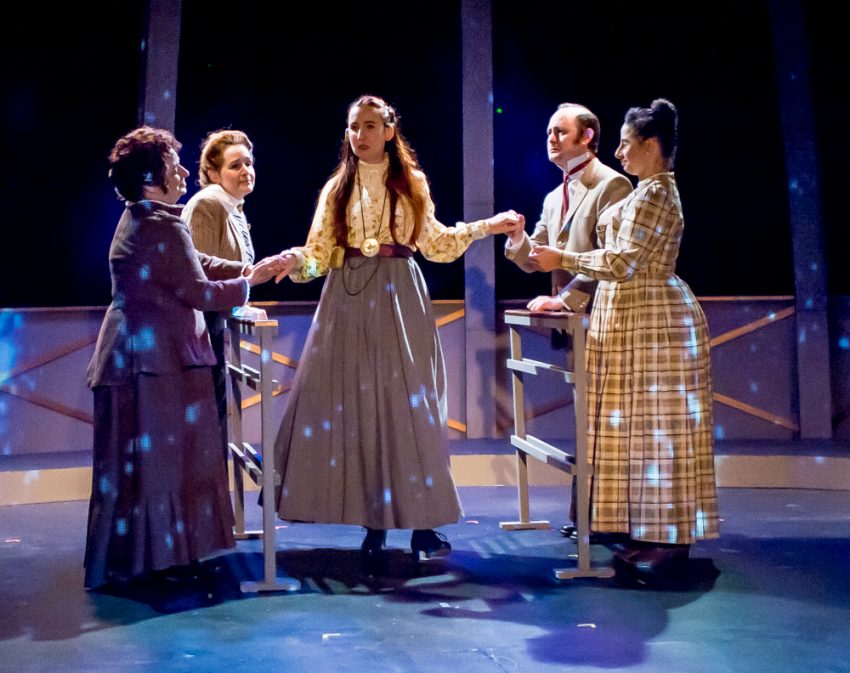 Bring your daughters to see “Silent Sky,” an inspiring tale of pioneering female astronomers. Set between 1910 and 1920, “Sky” portrays the life and work of Henrietta Leavitt, an astrophysicist who follows her passion all the way to a job at Harvard, at a time when few women were even employed.

Henrietta Leavitt leaves her father, her newly engaged sister, and her family farm in Wisconsin for a job with Edward Pickering, Director of the Harvard College Observatory. Once there, she learns women are forbidden from doing research or touching the telescope. She’s relegated to cataloging stars with two other women, jokingly referred to as Pickering’s Harem.

Williamina Fleming (Pamela Ciochetti) and Annie Jump Cannon (Rachel Kayhan) become her close colleagues. Fleming and Cannon engage us with sparkling, witty banter, contributing fresh comedy. When Henrietta wonders at their minimal roles, Cannon reflects, “We do the work required of us, and laugh at men behind their backs.” Williamina adds, “It’s worked for centuries.”

Pickering is so removed from his female “‘computers,”’ as they were known, we never meet him. Peter Shaw (Peter Warden), Pickering’s unimaginative ‘yes’ man, admits: “My father pulled a lot of strings to get me this position,” earning our contempt for his pompous privilege.

Later, we warm to Shaw, as he slips from contempt of Henrietta to admiration and feelings of romance. In one compelling scene, when Shaw and Leavitt find themselves alone in the observatory, the romantic tension thrills.

They have a universe to contemplate, after all, which makes for romantic dialogue. We see Shaw’s humble side and Henrietta’s vulnerable side, warming us to them.  But Leavitt’s commitment to her work, and her family, leads her to a crossroads, where she has to choose between love and labor.

Gunderson wonderfully simplifies astrophysics. When Leavitt discovers a connection between the pulsing of stars and their distant locations, she discovers the revolutionary idea that our universe is still expanding. As Leavitt, Isabelle Grimm does an engaging job of playing the astronomer’s genial brilliance, although I feel her unerringly optimistic portrayal could use some more lower key moments.

Ronald Krempetz’s impressive set with wooden boards depicting the farm, unexpectedly opens out to reveal the vast observatory. And where would a play about the universe be, without star projections? Needless to say, this production delivers.

Chloe Bronzan directs a solid and cohesive production, although heated exchanges can spike to melodrama, suddenly. Bronzan’s strength lies in pulling out nuances and subtleties from her actors.

An educational and entertaining play that leaves me inspired. Highly recommended.