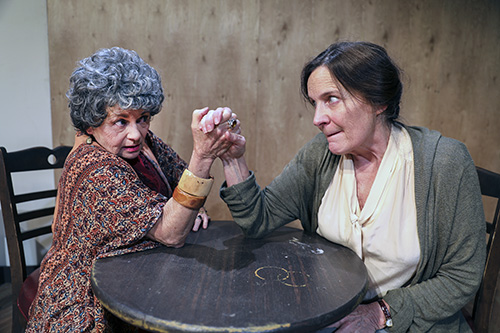 Working at a retirement home for a year, I saw my fair share of squabbles between residents, ranging from a stolen seat in the dining hall to snarky gossip about who’s sleeping with whom. “Ripcord” by David Lindsay-Abaire ramps up the senior drama to ten, as two headstrong women go to war over a shared room. Director Christian Haines and his superb cast take a thrilling leap of faith with a sharp and heartwarming comedy that sticks the landing.

For four years, the austere Abby (scintillating Michele Delattre) has lived alone in a two-person suite at Bristol Place Assisted Living Facility. Abby’s carefully maintained plants line the window, the only decorations in her otherwise sparse room. After she drives out other roommates, severe Abby enjoys the double room as a quiet, private single.

As Abby, Delattre brings a brooding depth, suggesting that her iciness is as much a defense as a weapon. We crack up every time Delattre delivers a perfectly withering “Go fuck yourself” to anyone  who dare annoy her.

Enter Marilyn (boisterous Ellen Brooks), a spunky, high-spirited grandma, whose wardrobe speaks as loud as her voice. Blithe Marilyn’s persistent optimism immediately wins us over. To our surprise, Marilyn cheerfully moves in, crowding her side of the room with pictures of family, and her grandson’s finger paintings. Marilyn is keen on Abby’s bed by the window, admiring the view.

Perfectly cast as the bohemian Marilyn, Brooks generously supplies sprightliness and wit to the role. She captures the essence of the adorable grandma we all love, preaching compassion and patience.

Abby desperately wants to get rid of Marilyn, but how to do it? While we’re inclined to root for kindhearted Marilyn, we find ourselves sympathizing with mysterious Abby, too.We suspect her snobbish exterior conceals tragedy and wonder what motivates her.

With neither woman willing to budge, the two make an absurd but fitting bet:

On the other hand, if Marilyn can disrupt Abby’s stoic cynicism, and give her a real fright, then Marilyn gets to stay—and take the bed with view.

With tensions running so high, we’re laughing at the ridiculousness of the wager, yet anxious to see who will prevail.

Cunningly, Marilyn kidnaps Abby for an impromptu skydiving trip, putting Abby on the spot in a cruising airplane!  We are shocked, as Marilyn forces Abby to choose between a terrifying parachute  jump or losing her bet and her bed. It’s the ripcord she must pull to avoid sharing her beloved room.

As the sensitive Derek, Nauman begs Marilyn and Abby to give up their harebrained trickery. During one of the funniest schemes, Derek, in a ridiculous bunny mask, nervously attempts to rob Abby. But Abby sees right through him, and poor Derek bursts into tears after being pepper sprayed in the eyes, pathetically crawling into Colleen’s arms.