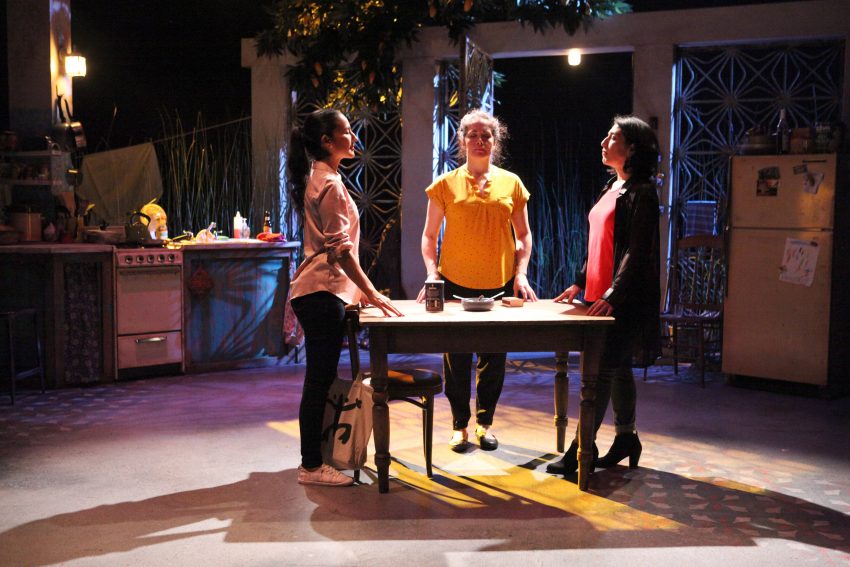 The world premiere of “Don’t Eat the Mangos” by Ricardo Pérez González takes us on a rollercoaster of emotions. During a hurricane in Puerto Rico, three spirited sisters confront the harsh reality of their dying parents, face hidden agendas, and fight poisonous childhood memories.

More than a family memory, “Don’t Eat the Mangos” depicts women’s fears of not being believed. Pérez shows how fear can and does silence women. His play and David Mendizábal’s subtle direction lead us to slowly examine our own history Only truth-telling can heal the traumas we carry.

Overgrown weeds cover the front of the family’s small campesino home, set in a jungle. A massive mango tree hangs onto the house; the garden is overrun with the mangos begging to be eaten. Even as poor kids, the girls have never been allowed to eat the golden fruit—a mystery.

There’s the bright yellow tin of Cafe Bustelo that graces all Latino homes, conferring authenticity. Their home reminds me of my grandmother’s house in Mexico. Soft Spanish music floods our ears, making me sway softly. The homey setting easily doubles as any working-class Latino house.

However, like a discordant siren’s song, Papi rings his incessant bell from his sickbed, commanding his three daughters. As Papi, miraculous Julian López-Morillas makes a wonderful, irrational fallen tyrant. Papi knows his days are numbered; but he revels in his petty power over the women.

Mama (Wilma Bonet) can equally give you a hug or smack you with a chancla. She is a force of love with strict discipline and no filter. Mama could be my mother, turning reality to fiction. Bonet makes Mama a frightful woman whose eyes convey more than any words.

Middle sister Yinoelle (Elena Estér) and baby sis Wicha (Marilet Martinez) have placed the house on sale because Yinoelle is moving to Denver.   She creates a crisis for the three sisters, and the family.

The women bicker, offering little relief from family tension. The eldest sister Ismelda (Yetta Gottesman) asks, “How can you leave a house you have always called home?” Tensions run high as the storm rages.

Although Ismelda has taken the role of caretaker for her bedridden father, she angrily cusses ill-tempered Papi. Though Ismelda is the first to criticize her father, she protects him fiercely. As “first daughter” to a violent patriarch, Ismelda radiates anxiety—a reality for most Latina women. We automatically become caretakers–if you are a “good daughter.”

Ismelda captures our attention with moments of silence.  Tethered to an abusive past, she hides secrets that will shatter the family’s fragile balance. But Ismelda is no passive victim. She uses her cunning to out-fox her sisters with a startling choice.

Visceral to the point of discomfort, “Don’t Eat the Mangos” leaves a sugary aftertaste, like a rotten mango. Perez exposes secrets that are hard to swallow. We wonder if any of these women can ever escape.