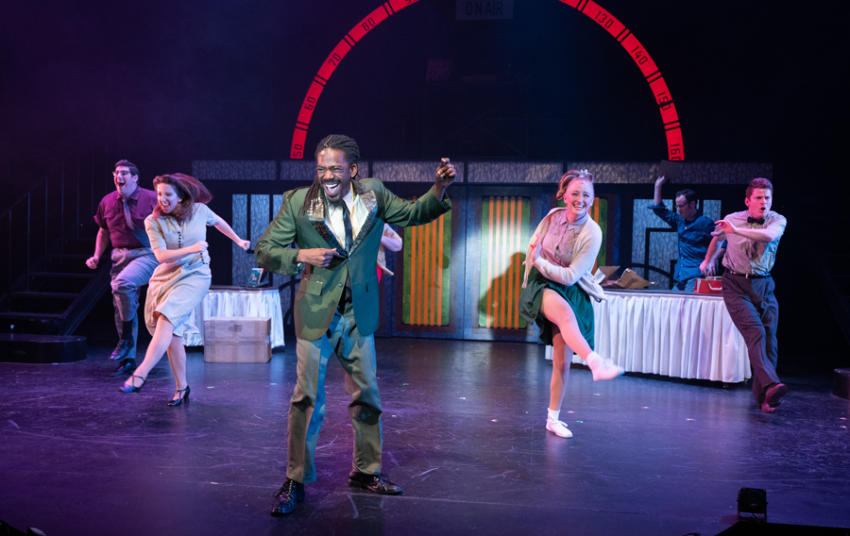 In “Memphis,” exciting music and dance move the soul. Under the inspired direction of Director Brendan Simon, “Memphis” offers non-stop entertainment. We are quickly caught up in the beautiful songs and intricate dance moves by the talented ensemble.

Set in the 1950s during the depths of race segregation, “Memphis” chronicles the explosion of black music onto white airwaves. “Memphis” is based on the true story of Dewey Phillips who broke the barriers of segregated radio music. Once Phillips opened the floodgates, young Americans embraced rock and roll booming from their radios.

The music sizzles and the dancers astound, thanks to spectacular numbers by Choreographer Christina Lazo and her dancers. Set Designer Sarah Phykitt has created a stunning set, featuring the giant, expanded arc of a glowing 50s radio dial.  Above the stage, a radio studio perches in front of the huge colored dial. Below, a succession of brightly dressed R&B dancers emerge through luxurious curtains, flashing lights, and clouds of smoke.

From the outset, Del Ray and his customers regard Huey suspiciously because he is white. When Huey hears Del Ray’s sister Felicia sing, he enthusiastically tells her that he is going to make her famous. Felicia’s beautiful voice touches our hearts, too—one of the best!

Felicia is shy and doesn’t realize her own potential.  After being put down for years by Tennessee racists, she mistrusts Huey, too. Huey slowly gains their trust; now, he is faced with making good on his promise. But Huey’s budding romance with Felicia complicates matters in Memphis.

When he tries to sell white radio bosses to play Black music, he is rejected by racist owners. Finally, he finds an opportunistic owner, Mr. Simmons (adept C.J. Smith), who will let him work two weeks without any pay.

But Simmons moves to fire Huey when he first hears Black music.  He quickly changes his mind when  the station is deluged by calls from young listeners.  And his advertisers are happy with their  increased sales. We see the influence of the capitalist markets here.

Their success brings fame and fortune to Huey and Felicia as their relationship blossoms. Despite the opposition of her brother and his mother, and white racists, they persevere to make their music and their love thrive. The promise of change comes in the tender ballad “Say a Prayer,” expressing hope for a changed future in the South.

“Memphis” provides a chance to say, “Thanks,” to Black and white musicians for knocking down the walls of U.S. prejudice and racism. Music is the symbol of progress in this beautifully staged  dramatic musical at Berkeley Playhouse.