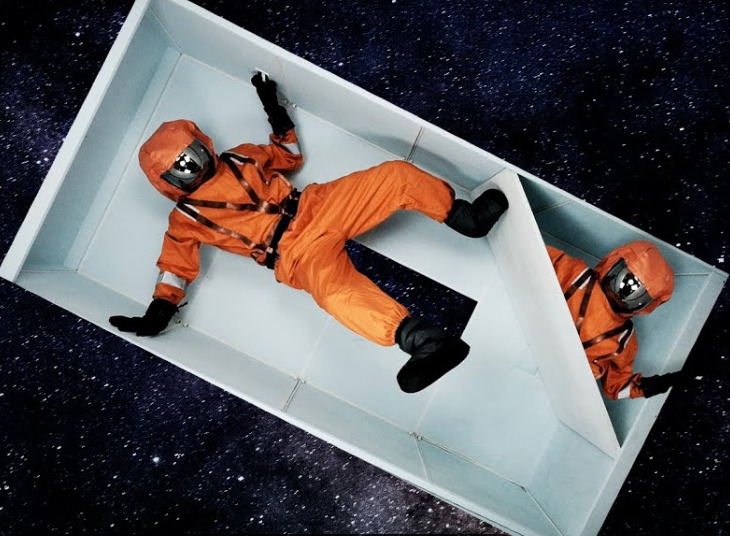 Josh Luxenberg Creates an Adventure in a Box

Director Jonathan Levin adds black and gray geometric blueprints around the spaceship, so we can follow Egon floating in mid-space. Ingenious.

When a piece of space debris disables his ship’s rudder, Egon needs two people to fix it. As the space ship swirls out-of-control into a time-loop vortex, Jesse Garrison’s stunning videos take over. They create spasmatic movements and flashes of color that make outer space believable.

We feel Egon’s desperation and disorientation in a narrow elevator; we roll with him from floors to walls to ceilings. Frantically, Egon crawls through hatches with comic contortionist ease.

Florian Staab’s original music and soundtrack imitate the serenity of space with soft, twinkling bells. We are engulfed in his loneliness, his horror of being adrift—as silence overpowers booming narration and creaky hatches.

Through the causal time-loop, Egon creates clones of himself, day by day, until 26 Egons pop up. Gelb masterfully portrays each emerging Egon with a breathless skill. Yet, after the first several clones, the humor wears thin. The Abbott and Costello slapstick style and the brisk cartoon music make me pause over the quirky humor.

The clatter rises as the bickering Egons debate every suggestion, confusing us. We meet all 26 Egons, past and present, children and old men They blame, disrupt, fight, and steal—expressing all his worst traits—26 times over, all tumbling out of control. We ask ourselves, “Where is this going?”

“7th Voyage” carries us from feelings of isolation to anger and then, confusion—reliving our present political nightmare. Poor Egon, trapped in his cramped space, wonders if he’s headed toward destruction. When more and more Egons cram into crowded quarters, they become an angry Egon mob. As they bicker, chaos reigns—reminding me of our hopeless “leaders” in Congress.

But Egon struggles, as we all struggle to embrace more aspects of ourselves, desperately seeking answers. Like Egon lost in space, we have lost our direction, our plan for the future.

Can he pull himself back together and pilot his rocket ship? The future hurtles at us, too, as our country loses its direction. We are besieged by fears and injustice. Can we adjust our course, finally?

Despite little meaningful dialogue and even less sci-fi suspense, “The 7rh Voyage of Egon Tichy”gives us fuel for thought, and maps new territories for adventure in streaming theater.

Luxenberg’s creation—a Charlie Chaplin style thriller—is one of the cleverest online productions I have seen to date. Take the white-box journey!

Banner Photo: Gelb in a tight spot. Photos by Theater in Quarantine