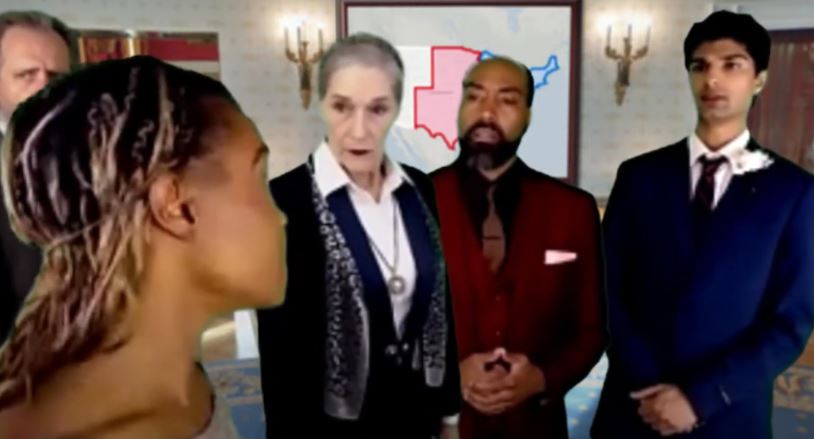 With a woman in the title role and three bi-racial daughters vying for the throne, Director Elizabeth Carter’s “King Lear” progressively challenges Shakespeare’s roles. Animating a remote cast of 13 actors, Carter carves a new path for virtual theater, putting live actors in action in front of romantic castles and forests.

Originally planned for “an expansive outdoor stage with a collapsing cathedral of trees,” S.F. Shakespeare Festival quickly moved into a virtual world. Carter uses virtual woods, barns, and fields, superimposing actors on these natural settings. The actors are performing live from the safety of their own spaces. S.F. Shakes’ “King Lear” beautifully exemplifies how the theater can adapt to our current pandemic crisis.

Carter’s gender-bending casting of breathtaking Jessica Powell as Lear gestures to the future. Powell undercovers feminine notes, while retaining the King’s fortitude and power. She descends gracefully into madness, from meticulously applied red lipstick at her palace to ragged hair and ripped clothes on a stormy landscape—all while on-screen rain and wind gently brush our headphones.

A female Lear adds maternal qualities in relation to her daughters—Goneril, Regan, and Cordelia. When Powell asserts, “Yet thou art my flesh,” we feel the unique power of a mother’s connection to her children and a deepened tragedy when this connection is lost.

As director, Carter captures new perspectives in her online “staging.” At the end of Act Two, I am glued to my screen. We look up through the eyes of the tortured Gloucester to see Cornwall, towering menacingly over us. After he bloodily and visibly rips out Gloucester’s eye, Cornwall whispers to his victim: “See’st, thou shall never!”  Half our screen goes black amid blood-curdling screams.

When we pan back to the offender’s perspective, we are looking down at a bloodied, screaming, now half-blind Gloucester. We become both victim and villain, simultaneously onstage and onscreen, partaking of both Cornwall’s cruelty and Gloucester’s pain.

S.F. Shakes’ “King Lear” gives us a chance to experience an evolving ‘new normal’ for the future of live theater. And that future is bright.

This new form of production offers innovations for our swiftly changing climate. We crave the live chat box feature, on-screen special effects, current social context, and a female-identifying figurehead. SF Shakes is laying the groundwork for what will be our new, and enlightened streaming theater experience. Try their Free Shakespeare at Home—and see for yourself.