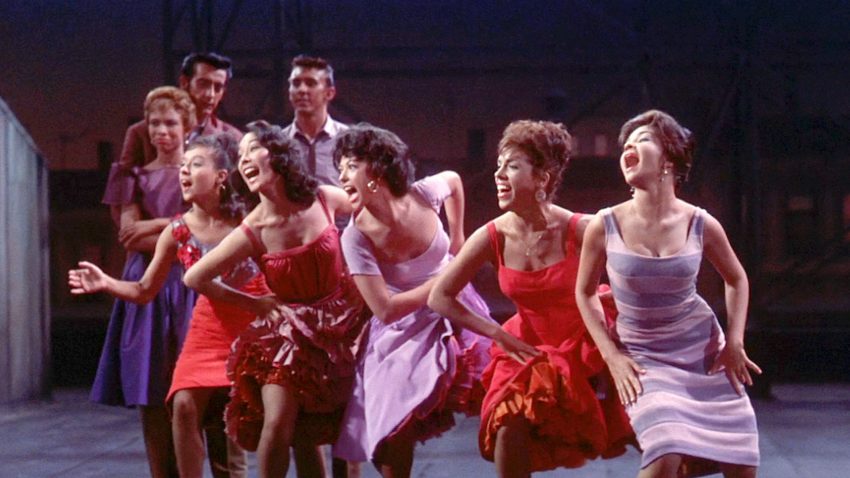 Whenever I hear the words “West Side Story,” I recall my Grandpa’s story of proposing to my Grandma at a 1961 packed premiere in downtown San Francisco.  Assuming the musical has a Hollywood ending, he pulled out the ring halfway through. Little did he know the ending challenges standard Hollywood “romance.”

Re-watching the musical classic in this age of quarantine and social enlightenment, I realize that Leonard Bernstein and Steven Sondheim’s ten Oscar winning masterpiece brings up modern conflicts.  The musical, based on “Romeo and Juliet,” looks forward to issues on immigrants, identity, and gender.

In the final scene, as Maria huddles over Tony’s lifeless body, one by one the Jets kneel down to help. Shockingly, they are joined by one Shark, then others. Death, the ultimate mediator, brings the rival gangs together to realize their true enemies: the swaggering police, the suffocating school to prison system, and the rigid definition of a woman’s role.

The Jets’ leader Riff (no-nonsense Russ Tamblyn) is hounded by Sergeant Krupke to “get off the streets” and “go home!” In the song, “Gee, Officer Krupke!” each of the Jets wisecrack as Riff is passed from judge to analyst to social worker. The last comment raises our awareness: “This boy don’t need a job, he needs a year in the pen!”

Sondheim brilliantly highlights the marginalization of kids of “junkies and drunks,” while people turn their backs. In 1959, Sondheim recognizes racism and the school to prison pipeline, using his lyrics and wit to hit the social justice bullseye.

We are immersed in the racial tension between the all-white Jets and their Latinx/Puerto Rican rivals, the Sharks. Directors Robert Wise and Jerome Robbins subtly explore police abuse of minorities, showing how police brutality inundates us—then and now.

Krupke forces Shark front-man Bernardo (effortlessly suave George Chakiris) and his friends to leave Doc’s Café, saying: “I got a badge, what do you got?” The officer flaunts his power, freely. Officer Krupke’s cockiness haunts us in the murders of Breonna Taylor, George Floyd, Ahmed Arbery, and Jacob Blake–forcing us to face our failures.

Clad in jeans, a loose-fitting tee, and white high-tops, Susan Oakes portrays Anybodys— an energetic, male-identifying transgender teen who tags along with the Jets. A longtime Jet named Action (fierce Tony Mordente) yells at her to “go wear a skirt” and “get lost!” Yet, confidently, they persist.

Anybodys rushes to deliver crucial gang intel, receiving the sought-after: “Ya done good buddy-boi.” They are finally treated as a member of the Jets. Playwright Arthur Laurents offers inclusion for Broadway’s first transgender Anybody.

I will always love this musical: from the carefree optimism of our latter-day Romeo twirling in the moonlit street to Anita’s fiery tangos, it’s still a joy. But now, this masterpiece makes me wonder how long our police will continue to murder innocent people. When will Anybodies of any race or gender be accepted with open arms?

We can take comfort in the fact that musical theater can cut a trail towards fresh acceptance. Sondheim and Bernstein give us hope that eventually there will be “a place for us.”