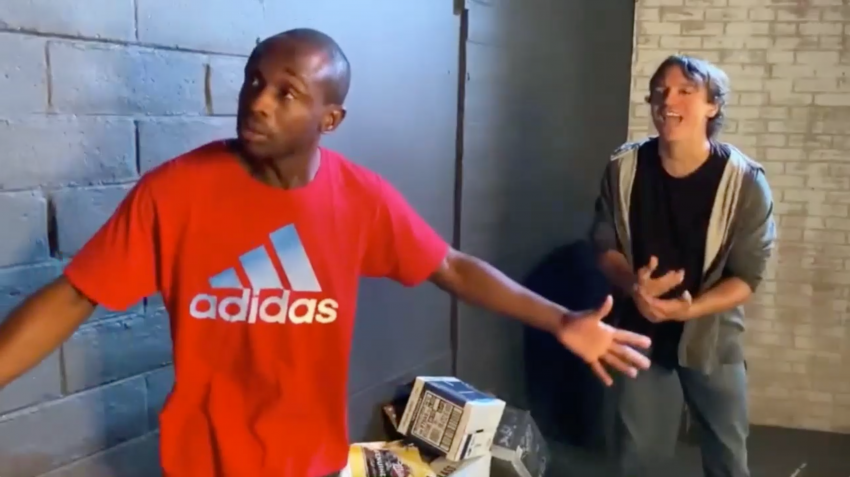 Has anyone forgotten what we learned in 2016? Have we figured out yet why mid-western factory workers went for you know who—after voting for Bernie in the Michigan primary?

Lynn Nottage’s great Pulitzer Prize winning play, “Sweat,” has pointed out the problems we refused to face four years ago, and for decades before—the outsourcing of jobs from the U.S. Nottage shows American workers suffering without any government help.

I remember crossing a nearly deserted Times Square on Election Night—walking among cables and puddles. The unthinkable had happened.

But history does Not repeat itself, and we have learned about so many lies since 2016. This President is not a re-run of Nixon or Reagan or W. He is far worse than anything we can recall or imagine.

In “Sweat,” Nottage has shown us precisely how Rust Belt workers have struggled; she paints powerful pictures of Chris and Jason (Skylar Bird and Sam Ademola), two young steelworkers at a hard-driving plant in Reading, Pennsylvania. She shows us their mothers, Tracy and Cynthia (Jill Zimmerman and Serena Elize Flores) who have worked on the factory floor for decades. These two families are broken and dying after so many years of sweaty, bone-crushing work.

In Director Argo Thompson’s Zoom production of “Sweat,” we see believable, earthy steelworkers hanging out after work in the wooden-walled bar in the traditional steel town. For much of the play, they speak separately to the other characters off-screen, and occasionally, we see two or three actors together. This new effect works emotionally, emphasizing their isolation from each other.

It’s an innovative way to present characters, and the setting works well to highlight potent individual actors, although it slows down the pace of Nottage’s complex creation. We easily enter Cynthia and Tracy’s psyches, and the passionate conflicts of their grown sons. They are all trapped in the factory’s iron grip.

Although they have devoted their lives Olstead Steel, the factory feels no loyalty to them. Soon, Olstead will surprise them by abandoning Reading, to let the city sink into deepest poverty.

As confusion, in-fighting, and mistrust grow, we feel the intensity affect us. Nottage brilliantly demonstrates how the personal and the political are intermingled in every job and every decision—even when the economic truths are kept secret from workers.

Director Thompson offers touching psychological studies—like the alley scene where Tracy and Oscar (Anthony Martinez) go out of the bar for a cigarette break.  Standing far apart and leaning on the same cement wall, we get a strong sense of their isolation and their distrust.

Tracy has been working for twenty years on the factory floor, and now Oscar shows her a leaflet in Spanish, advertising for replacement workers to take their jobs. Jill Zimmerman persuasively embodies Tracy’s misplaced anger, showing us that Tracy goes to anger, while Oscar is trying to tell her important news.

Each worker is separated from the other: Bartender Stan (Mike Pavone) tries to keep peace and gets swept up in violence. Brucie (Corey Jackson) tries to reconcile with his son, but is derailed. Serena Elize Flores reaches deep for Cynthia’s frustration. Their emotional scenes ring true. And the isolated characters blossom in their separated zones.

When you see Thompson’s powerful online re-imagining of Lynn Nottage’s great play, you will understand their anger and frustration. This “Sweat” asks: Are the Democrats offering U.S. workers retraining and hope to alleviate their despair in 2020? Or, are we rolling to doom?