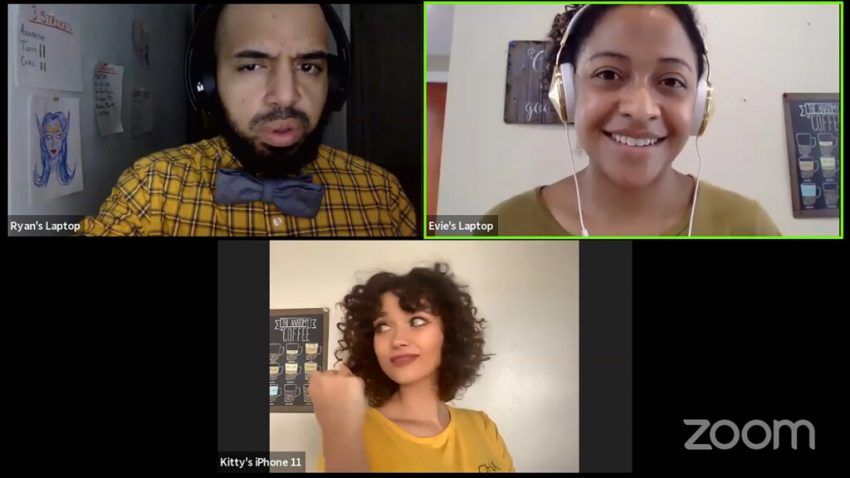 World of Warcraft—WoW—is an actual online role-playing game that Madhuri Shekar creatively weaves into “In Love and Warcraft.” Shekar’s play tells us about the young gamers’ frustrations, their avatars, and real-life crushes.

And if you have an equally hooked gaming partner, like Evie’s secluded friend, Ryan (fast-paced James Mercer), you could hide in that world forever.

As a college English-Lit major, Evie writes letters for tongue-tied, love-sick youth—a regular Cyrano. But she spends most of her free time in the game. She vows to reject love and never to have sex—making us curious about her past.

Kind Raul (Hernán Angulo), one of her lovelorn clients, falls for quirky Evie. Attracted to him, she promises to give up her game compulsion, if he promises to honor her virginity.

On the surface this plot is thin. Boy meets girl, girl likes boy, conflict emerges, and we suspect it will end happily, with Evie and Raul in bed. But we must consider the pull of the video game.  WoW frees Evie from control by a boyfriend or outside demands. She is still her own warrior, a hero in battle.

Sex-crazed Kitty (spirited Evangeline Edwards), her roommate, encourages Evie to get into sex, and out of the game. As Kitty, dynamic Edwards breathes life into their confrontation.

We wonder if sensitive Evie can bridge the powerful world of the war game to the delicate world of emotions and love. Now, curiosity builds.

The less time she plays the game, the more of her warrior powers she loses—but her connection with Raul strengthens. Caught in the middle, Evie argues with Raul—revealing her fierce warrior persona. When they split, Evie returns to WoW world, where she can always win.

They eventually compromise, and unexpectedly cross a bridge to each other’s world. The satisfying ending meets the needs of both parties. They share their interests and strengths without losing their identities.

The Zooming format works unevenly, with odd-shaped boxes and a slow pace. The awkward scene changes and attempts at bridging boxes throw the charming characters off balance, detracting from the story—especially when Evie and Raul kiss.

Although at times, “In Love and Warcraft” seems aimed at adolescents, Shekar delivers the real-life goods on youthful compromise, identity, and attraction.

“In Love and Warcraft” by Madhuri Shekar, directed by Peter J. Kuo, co-produced by American Conservatory Theater and Perseverance Theater—Streaming at: act-sf.org —to September 25, 2020.