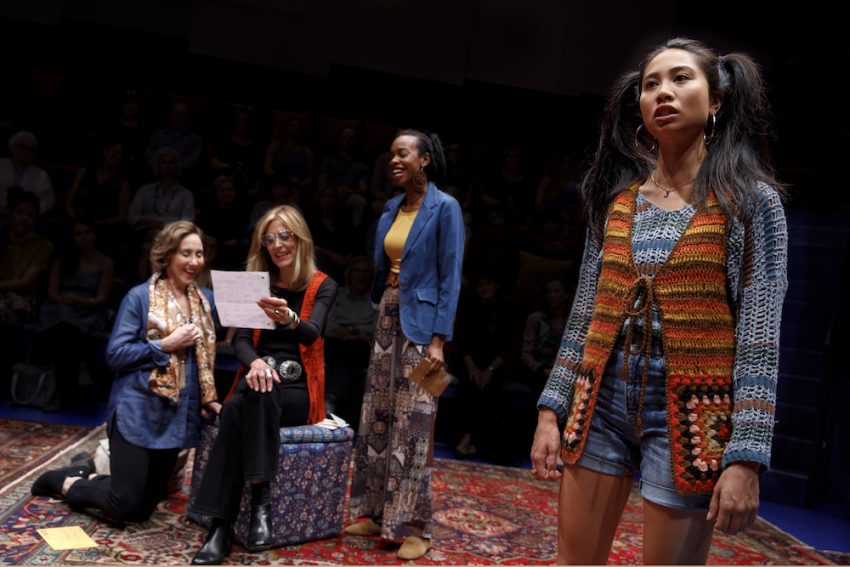 Emily Mann’s Off-Broadway play “Gloria: A Life” offers a shocking timeline of how professional women were treated from the 70s onwards. The rights women enjoy today were unheard of when Gloria Steinem started working in New York as a journalist.  Bosses tried to seduce or bully her. It wasn’t easy for Steinem to work a “man’s job” in those days.

With a talented team of six women, the incomparable Christine Lahti plays crucial moments in Steinem’s long history of firsts–from reporting as a Bunny at a Playboy Club to the co-founding of Ms. Magazine.

Steinem and activist Dorothy Pitman Hughes toured the country together on a bus. They visited the South in an emotionally moving grassroots outreach to Black and White women. They make a powerful team that changed minds and lives—as Steinem recounts in My Life on the Road. She becomes a great Listener—paying attention to other people’s feelings, as Lahti embodies her growth.

Its stunning to see Steinem waiting in the lobby of the Plaza Hotel for an interview, when the manager tries to shoo her away. He thinks a woman alone must be a prostitute. It’s a treat to watch Steinem get her revenge.

The swirling story goes by at high speed, with projected news clips spinning us through her inspiring life. Her total devotion to the cause, and the insulting treatment of women hold us gripped in Lahti’s precise, loving evocation.

It turns out her mother was also a practicing journalist, but gave up writing to be a mom. When younger Gloria discovers her mother’s lost ambitions, she alerts us to the tragedies of many woman.

As Wilma Mankiller, Delana Studi makes a powerful case for Native American women, when Mankiller goes on to become Chief of her tribe. The women onstage embody leaders like Shirley Chisholm, Bella Abzug, and Florynce Kennedy, as well. Change in America becomes their long-term A-team struggle.

After Gloria’s enlightening story, out comes the real Steinem at 84. Dressed exactly like Lahti in flowing bell-bottom and signature red scarf, the feisty feminist leader answers questions from the adoring audience.  Steinem’s 20 minute “Talk Circle” warms the heart and moves the soul.

What’s most exciting is that she had no overall plan but just grew and developed her views. “Gloria” shows how Black women leaders gave her greater perspective and revelations.

I enjoyed the videos, headlines, and news stories as they flash onscreen—a spectacular HER-story of  Steinem’s odyssey. I came away with a real appreciation of what one woman could do to fight for equal rights.

But it’s Christine Lahti’s show! After watching Lahti striding around in bell bottoms, in Steinem’s softly assertive manner, we are convinced that this living legend is still listening, and helping us change our lives. 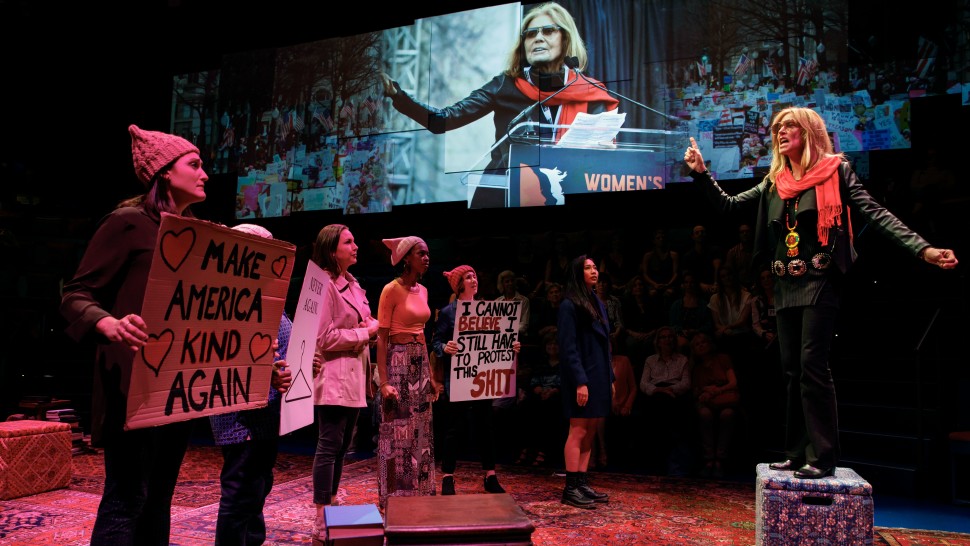 “Gloria: A Life” by Emily Mann, directed by Diane Paulus, based on Gloria Steinem‘s My Life on the Road, filmed at Daryl Roth Theater, New York, in 2018—Streaming at PBS.org