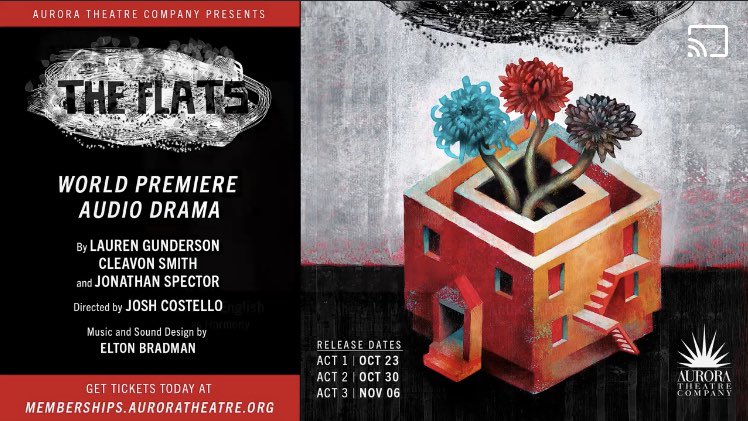 Aurora Theatre has come up with an experimental, three-part, audio thriller called “The Flats”—part play and part character study. Three local playwrights and their director have collaborated on a drama centered on the terror of a looming world disaster—akin to what we face now.

Set in Berkeley during a lock-down, police patrols prowl the streets. While a helicopter headlight hovers over the flatlands of West Berkeley, three neighbors hunker down in fear. It’s true that The Flats, once a mostly Black neighborhood, has been gentrified, banishing its former residents.

“The Flats” directs us to explore current issues, bringing together psychological and political concerns through the lives of three diverse neighbors. Each of them is adrift in the mysterious, impending calamity.

Anthony Fusco gives a striking performance as Leonard, a delightful, witty, and philosophical old hippie, who lives in the Berkeley triplex. His steady and comforting voice explores “those in power.” Leonard enlightens his YouTube fans with theories about the government and the church, questioning all authority.

Harmony, the owner of the triplex, flees her husband and children, moving back to the third- floor unit. She embodies the needed return of the #MeToo and women’s movement. Lauren English makes us believe in and root for Harmony.

As Brooke, Khary L. Moye convinces us that he wants to know his new neighbors. But Brooke feels unwanted and fearful in the gentrified, white man’s neighborhood. As he sees the police helicopter, Brooke muses aloud: “The greatest threat is … the same it’s always been, Black people.” We are eager to learn more about his past experiences.

As the three get together and discuss the threat, strange discs appear in the sky. Leonard says that the discs are called The Flats, as he directs them to safety in the basement. The three promise to “keep an eye on each other. We are all in this together.”

In Act One, the ending seems hurried, since the three, eager for contact and comradery, have just met. We will pick up with them in Act Two, on Oct. 30.

In this Act, we are mainly introduced to the three distinctly different and well-acted characters. With Costello’s detailed directing, these accomplished actors shine. With fine resonance and pacing, each voice clearly defines a person and the problem they express.

They leave us with hanging questions as they touch our own nightmare with Covid 19. I am curious about how the three neighbors view the threat, what is the threat, and how they will react in the face of that threat.

I look forward to seeing how Leonard, Harmony, and Brooke’s fragile connections will strengthen in the coming two weeks.