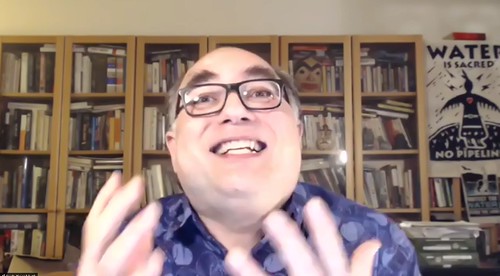 Josh Kornbluth has found a way to link self-discovery to political regeneration. He has blazed a trail from the personal to the political–with good humor, friendliness, and warmth.

Josh, a delightful, inviting solo performer zooms his show from his apartment in Berkeley, thanks to the Shotgun Players. Josh shows us how exercising the “empathy circuits” in our brains keeps us alert by caring about others. And he does it with personal revelations and great comic timing.

When his beloved stepfather, Frank, in Chicago, began to decline mentally in retirement, Josh wanted to learn more about dementia, to help him Mom and Dad. Josh, the master storyteller, looks us right right in the eye, drawing us into his story. So, even though he is terrible at science, he applies to be a Fellow at the Brain Institute at U.C.S.F. to see if he can help his parents. He follows his heart, and takes us effortlessly with him to the interview.

It’s incongruous that an actor and comedian would be a Brain Fellow but those are the comic twists of Josh’s unique personality.  Despite his lack of training, he wins over the doctors–and they make him a Brain Fellow, even though he’s a performer and comedian. His wit and his hopefulness take us on his extraordinary journey—leading to this ingenious, at-home Shotgun show.

From Dr. Bruce Miller,  his mentor at UCSF, Josh finds out that dementia patients lose their empathy, first. Droll and enthusiastic, Kornbluth rolls out some stunning messianic messages. He is talking about building a human brain that empathizes with other citizens, as well as the self, and asking: Could it  be that our country has dementia, too? Have we fallen into the dementia trap because we no longer can imagine the feelings of the “other”?

Josh figures out that a new Citizen Brain can build a bridge between the individual psyche and real feelings for other citizens.

Josh puts his insights into practice, right in front of us. He learns about amazing Magnetic Resonance Brain Imaging that reveals dark blockages in the brain–brain “blockages.” As he unravels his story, we realize that he is applying the brain work to our political map, too.

On his hilarious, enthusiastic journey in the Brain Institute, he discovers that dementia can be forestalled or possibly even prevented. It turns out that the “empathy circuit” really exists and glows brightly in brain scans—and, with awareness, empathy can be trained and developed.

When he goes to his stepfather’s funeral, he runs into a brilliant Black woman scholar who sets him on a new track of self-questioning.  She points out that the new brain potential must lead to action. And we find out how to spread Empathy from one caring citizen to the whole power structure. It’s exciting to learn a new way to challenge authority. Josh the comedian has fulfilled his parent’s hope for a worldwide revolution, at last.

Josh is on a mission—he wants to spread the Empathy revelation. His left-wing parents in New York would be proud and he wants to carry on their hopes. Sitting in his Berkeley living room, against a wall of books, he reaches his hands out to us. He takes a couple of deep breaths and contemplates other people–their history, their desires.

With wise comedy and fierce friendship, Josh Kornbluth shows a way to remake our country–one neuron at a time. Josh turns his brain into the Citizen Brain. Don’t miss it!  He’s a magical, medical marvel—full of heart and soul. It’s a great pleasure to laugh and learn, together with Josh.

“Citizen Brain” by Josh Kornbluth with Aaron Loeb and Casey Stangl, directed by Casey Stangl—Streaming at Shotgun Players.org – to November 8, 2020.