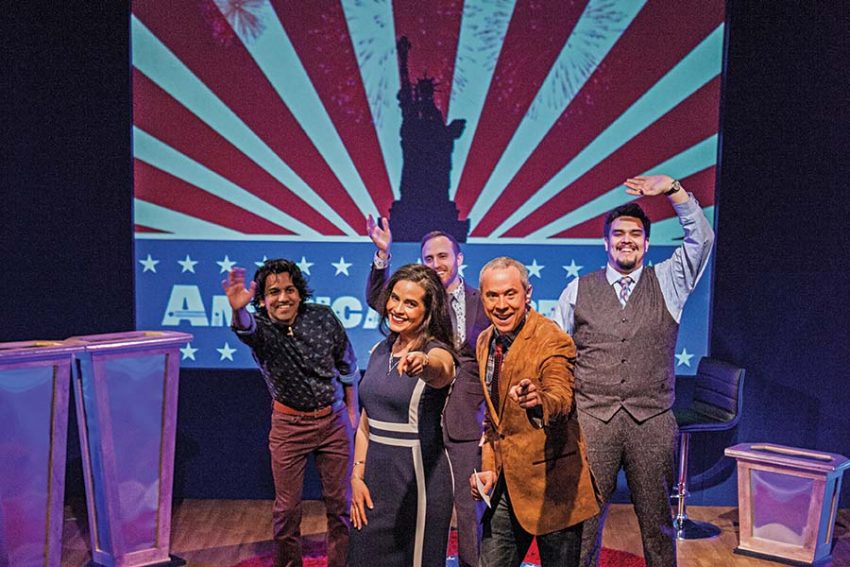 “American Dreams,” with its built in rising dynamic and audience interaction, has the absorbing compulsion of reality TV— and a menacing undertone.

The occasional, quickly resolved technical hitch adds the thrills and spills of live television as theater. Leila Buck and Tamilla Woodard pit their wits against the lockdown. They ridicule a racist White House with a satirical, over-the-top, interactive live game show.

Performances are all great. It takes guts and preparation to face an audience and answer random questions. Leila Buck and Jens Rasmussen play avuncular hosts, with flashes of aggression, adding to the unpredictability. The design is purposely trashy Fox Game Show.

Three immigrants are competing to win U.S. citizenship, with a cash bonus for the winner. They undergo increasingly personal cross examinations; and then, we get to choose the ‘worthiest’ applicant by voting—a cruel parody of citizen selection.

I’m feeling like a willing participant in an unethical human experiment. The hosts tell us, archly, that we’ve been given top government clearance in order to perform our selection.

As a naturalized immigrant of ten years, myself, I can vouch that the questions about government in the first round, come from an Immigration Department booklet, and I’d now fail to get the required six out of ten answers right, as would many of my American born friends.

The pressure mounts as we learn the skills of our contestants: young men from Israel, Pakistan and Mexico. My husband was too alarmed by the idea of audience participation to watch the show with me. However, the process doesn’t ask much of us. We all put thumbs up or down under the duress of our hosts’ increasingly invasive questions.

In our new role as Immigration Officer Overlords, our opinions about borders get pushed up against Trump’s proverbial wall. We’re forced to confront our own privilege, and our own racial and religious biases. Questions of personal ethics, privacy laws, and racial profiling pop up, as we reject two and select just one potential citizen.

I can testify that a visit to the Immigration Office, usually hours long, and investigating some minor technicality, always left me thinking that their HR department DEFINITELY needs an overhaul—and SOON!

Under the present regime, kids have been separated from their parents at the US border and thrown into cages. The tragic irony being that these same immigration and border patrol officials are overwhelmingly likely to be descended from immigrants themselves.

The final part of the play mentions the original Indigenous people from whom America was taken, raising the question who are we to decide whom to admit to this country, anyway? I’d like to see this issue more integrated into the game show premise.

Overall, however, this opening play for Marin Theatre Company’s new season is a darkly comic hit. “American Dreams” has a fast and frantic pace that testifies to thriving theatrical creativity, using new ways to tell stories. See it, and don’t forget to vote!