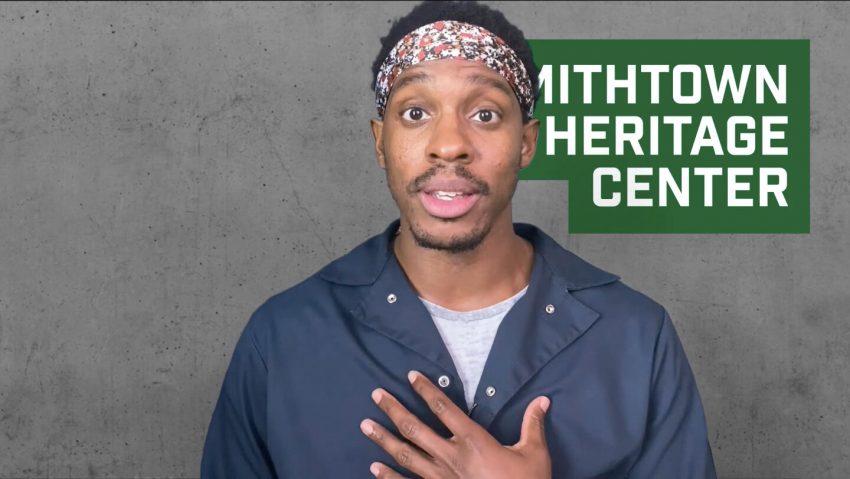 Like a falling line of dominoes, the four dynamic monologues of “Smithtown” unfold events that destroy a young girl’s life. The tightly written emotional scenes from The Studios of Key West highlight media-savvy citizens who fall prey to their own self-interest.

Then we meet the grinning, smug “radical” video artist at “Smithtown Heritage Center.” And lastly, a distressed mother who, ironically, turns to Facebook for consolation.

Grad student Ian A. Bernstein (dynamic Michael Urie) is teaching “Ethics in Technology” at Smithtown College. With his upbeat, ingratiating personality, he welcomes us into his class. I feel eager to listen and learn. Holding up his ‘smart’ phone, he reminds us that “The device is a weapon.”  We learn, through Bernstein, how texts can weaponize thoughts and feelings to shatter an innocent life.

Sweet and funny Bonnie (versatile Ann Herada) runs “Text Angel,” an app that sends motivational texts to clients who need a kind word or call to action. In a basement under construction, Bonnie stays buzzed on Mocha Java. But she’s tired, and accidently switches texts, adding another domino to the cascading catastrophe. She excuses herself with: “Sends—a text message–are not always to blame.” Like Ian, Bonnie hides behind feeble excuses.

Do they feel remorse, or are they seeking cover? It’s happens to many of us. We send a text, just a thought, a note, a negative response out of annoyance or anger. Maybe we even let off steam, vent, like politicians On Line. It’s impulsive, and can lead to disaster all round.

Director Stephen Kitsakos develops each character’s uniqueness. By adding diversity to the drama, he delivers a dynamic psychological play complete with suspense and climax.

Eager Eugene (humorous Colby Lewis) smiles broadly in front of the “Smithtown Heritage Center.” As the center’s ‘Jack of All Trades,’ Eugene claims that his art-video of the disaster “will show the truthfulness of the human condition.”

Eugene is justifying yet another horrendous choice, drawing us in with his welcoming smile and “artistic” philosophy: “If you stop recording a struggle to help those struggling, you lose the depth of their struggle.” His misleading ideas about “objectivity” lead to ignoring an imminent tragedy.

Lastly, we meet Cindy, the distressed mother (exceptional Constance Shulman), who performs the most heart-rending monologue. In her shiny red 50s Formica kitchen, Cindy unspins her sad story to neighbors. In her never-ending anguish, she even turns to Facebook “Friends.”

“Smithtown” spotlights the dangerous carelessness of tech world attacks and conversations, reminding us that impulsive texts can destroy lives. A must see for the precision acting and its revelations on social responsibility.

“Smithtown” by Drew Larimore, directed by Stephen Kitsaka, at The Studios of Key West—Streaming at TSKW.org – till March 13, 2021.