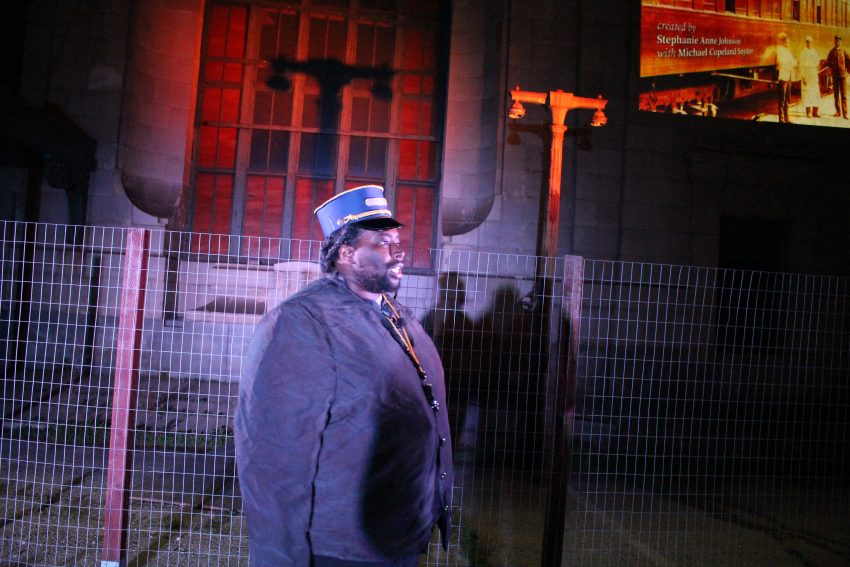 Thirty years ago, Stephanie Anne Johnson and Michael Copeland Sydnor created an outdoor docudrama that tells the history of the monumental 16th Street Railroad Station in West Oakland. Today, Oakland Theater Project brings back the stories of the migrants, Union organizers, maids, and conductors who made that grand 1913 Southern Pacific Station a wonder for decades.

Oakland Theater Project (formerly Ubuntu) brings the show back to life, as we sit in our cars gazing at the huge, abandoned station and its photos and interviews. Memories of immigrants flash by on the stone façade, full of hope and struggle, as we listen to their voice on FM car radio.

Uniformed Pullman conductor William Oliver III helps us understand: “Oakland is some kind of town, ain’t it?” And then the story unfolds in one swift hour, unified by a grand idea: “Each one helps one.”

From the parking lot at “16th Street Station,” news of the past and our possible futures shines back at us from the abandoned station that gave birth to so many Bay Area families.

Taking us from 19th Century railroad building days, through the Jazz Age of the 20s, and the Great Depression of the 30s, WWII, and up to the 50s, the story unfolds slowly and meditatively. “Binding Ties” adds breadth and depth to their stories  of Chinese, Japanese, Mexican, Latin American, and Black migrants—a stellar American re-telling.

Our radio tuned FM takes us back to Johnson’s original parking lot show, as we hear the voices of people who arrived from all over the world. Oakland’s bold answer to pandemic theater starts with the Pullman conductor saying: “Oakland is some kind of town, ain’t it?”

We see brave Chinese laborers, trudging up the mountains, hard-working Black migrants from the South, and workers of all origins. We are touched by their torment and bravery, as they face racist laws, ‘legal’ discrimination, and blatant prejudice.  Yet they persisted, worked hard, and sent for their families. We all spring from their story.

The show takes us through the arrival of African Americans in Oakland and the roles of Pullman porters and maids who kept up those cars. The women wore gray silk uniforms they had to buy themselves, and kept the cars spotless, working for little money and less appreciation.

A. Philip Randolph and C.T. Dellums organized the Pullman conductors into a strong union, helping to raise Black workers from low wages—a breakthrough. The flood of Black workers from the South in The Great Migration, and from all over the country reshaped the culture of Northern California. And their struggle for justice and rights continues.

The personalities of Black, Asian, Latinx, and other workers shine through on the face of the former rail palace. Oliver explains the unity of those memorable people, who assert: “We treat each other like family. We all do our part. If everybody’s IN, then everyone WINS.”

Integrating the captivating stories at the actual place of their birth with the unique drive-in setting gives us time for reflection. Congratulations to Oakland Theater Company for unique,  site-specific, historical setting.