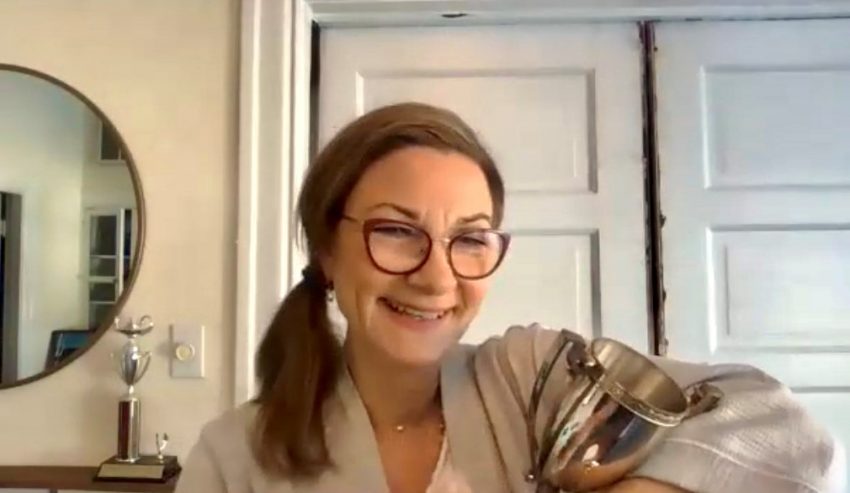 Sharp, biting dialogue between a desperate mom and her Chess champion daughter reminds me of corporate skullduggery. Each side attempts to undermine the other, while pretending to serve a higher cause. The age of cutthroat competition has come down to the family unit, wreaking havoc between parent and child.

Women are not immune to the demands of winning in this tussle between the older and younger generations. Cruelty has replaced compassion, and cynicism beats out sisterhood.

In Remote Theatre’s production, two protagonists share the screen in Anthony Clarvoe’s “The Art of Sacrifice,” a confrontation between mother and daughter. As the domineering mother Willa, multi-talented Susi Damilano delivers a ferocious power-hungry mom.

Willa is still working, nonstop, on her sensitive daughter Nora (always-intriguing Lauren English). Even though Nora is already the U.S. Chess Champion, she remains anxious around her Chess Mom.

The scary mother wanted her daughter to shine, and her talent turned out to be chess. So, she focused laser-like on Nora’s budding skills and raised an oppressed, one-dimensional competitor, willing her into winning. Susi Damilano’s fierce Willa embodies all the selfish traits a parent can have, as she feeds vicariously on Nora’s successes.

All that Willa cares about is shiny chess trophies and beating the other players—like a corporate raider. She insists on being the center of attention, stopping a tournament to get a light bulb changed—to intimidate her daughter’s opponents.

Willa, preaching the Gospel of Winning, reminds us of a former President who viciously attacks his political “enemies.” “The Art of Sacrifice” warns us against those who are obsessed with being “Number One,” shoving aside our humane impulses.

When she sees her daughter arriving with a trophy, Willa says, “Hello, shiny guy! Look at you!” She values the trophy over her suppressed daughter.

Lauren English endows Nora with just the right amount of fear and anxiety. Nora, a wary watcher of Willa’s ways, reflects years of intimidation in her calibrated moves.

Delightfully, we watch their maneuvering, like the cobra and mongoose, as they search for advantage, exploiting weaknesses in a lifelong chess match. They jockey, they feint, they deploy the pawn and queen in the art of sacrifice.

Clarvoe’s strategic two-hander is a black comedy about sacrificing your wits and gifts in order to win, however fleetingly. “The Art of Sacrifice” shows how extreme competition and individualism will deform mother-daughter love. Desdemona Chiang directs these two consummate San Francisco actors deftly and delicately.

We realize how much each has given up. Doubt assails Nora at every move—how much has she sacrificed? Has the game left her half a human being? Damilano and English are at the top of their games, working seamlessly together, move by move.

Clarvoe’s human chess stratagems, as they suprizingly exchange roles, serve up a tantalizing drama fit for our world of breakneck narcissism. Bravo to cast and crew for a thrilling match-up!

“The Art of Sacrifice” by Anthony Clarvoe, directed by Desdemona Chiang, music by Paul Dresher, by Remote Theater with Actors Reading Collective. Streaming at: Remote.Theater – to March 28, 2021.