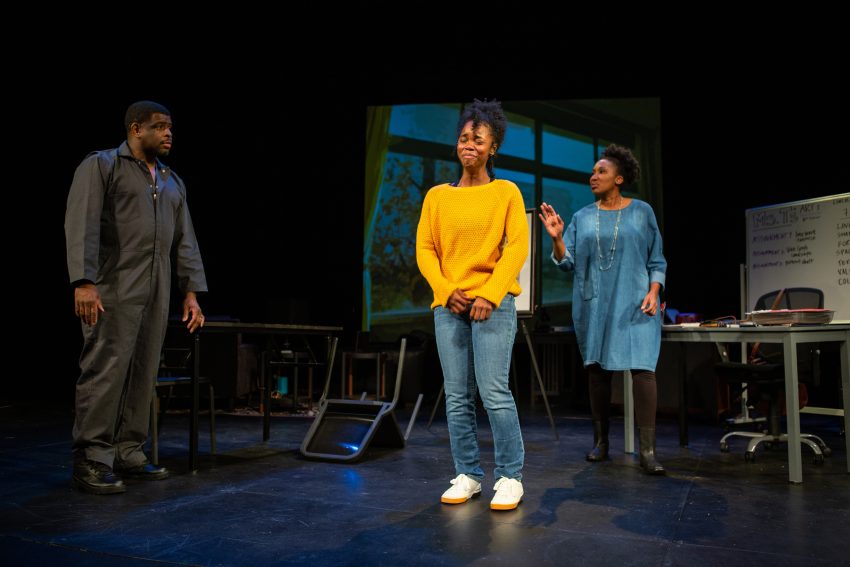 “[hieroglyph]” tells the horrific tale of thirteen-year-old Davis Hayes, brilliantly played by Jamella Cross. Davis was displaced from her home by Hurricane Katrina into the New Orleans Superdome—where refuge became a hellhole for 16,000 thousand victims. In the stadium, women and children were raped and left for dead—a terrible reminder of how we fail our poor.

When Davis moves in with her father to Chicago, she sees more horrors occurring on the streets. Ernest Hayes (versatile Khary L. Moye) loves his daughter, and working as a janitor, he struggles to keep up with his job, his absent wife, and his anxious daughter.

But Davis carries a secret with her. We know what it is. The harrowing experience replays in her nightmares—as she screams her assailant’s name to the darkness.

Playwright Dickerson-Despenza mixes a docu-drama on poverty with insights into rape survivors. She reveals how Hurricane Katrina exposed the ongoing, traditional degradation of poor people.

Even after the assault, the victims continue to be mistreated, and neglected.

Davis befriends streetwise Leah (lively Anna Marie Sharpe) who teaches her the ways and dances of the street, mainly how to sexually attract a boyfriend. Davis torn about dating, and naturally curious about boys, is still uncomfortable being physically touched.

Ms. T. becomes a hero, when she imparts the secret signs to Davis’ father.  She tries to explain to Ernest that the drawings depict what women go through after rape. Often victims know their assailants—many times a family member or “friend.” Davis knows her perpetrator. Yet she is not believed because the woman is always doubted. Her words are devalued, and we blame the victim.

Even though Hurricane Katrina struck the gulf coast on Monday, August 29, 2005, little has changed for women who have been sexually assaulted. We need plays like this to constantly remind us about their trauma.

As student and teacher, Cross and Fredericks’ interactions feel honest and real. Davis’ fear of exposure and Ms. T.’s helpful urgency are palpable.

“[hieroglyph]” leaves me wanting to know more about each character. Although Davis begins to face her trauma and resolve some truths, we wonder what price she has to pay.

“[hieroglyph]” is powerful, and the ending unexpected, with both Cross and Moye, daughter and father, leaving us speechless and waiting for justice.