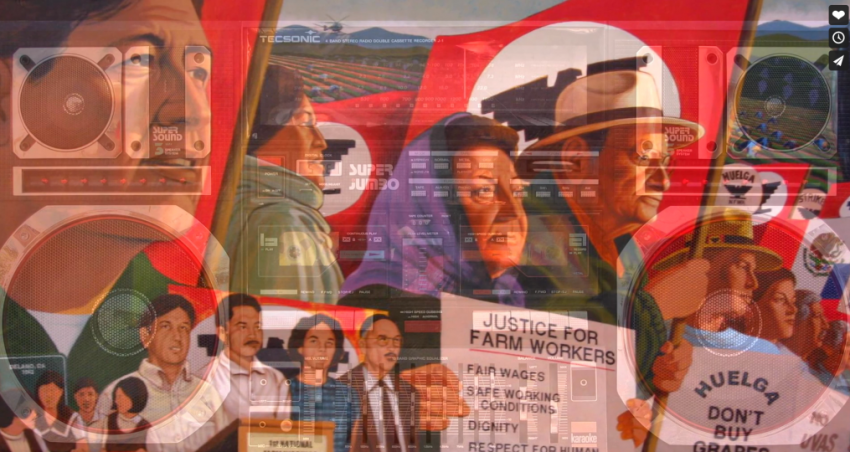 TheatreFirst’s audio docu-drama “More Than Grapes” captures the plight of thousands of abused grape pickers from 1965-1970 in Delano.

Using undated reel-to-reel “Field Tapes” found in an abandoned school, writers Carlos Aguirre, Jeffrey Lo, and Lisa Ramirez create a kaleidoscope of historical and personal experiences that span one of the largest movements in America.

We are left to place bits and pieces of 32 short reels together to complete the puzzle of the five-year struggle for farm workers to win the battle against exploitation and dehumanization.

Thanks to the Tapes, we also hear the voices of the farmworkers, themselves. We get to walk in their shoes, to “smell the grapes, the mist of the dirt, the soil, the candles at church.” We eavesdrop on their banter: “Down the hill, dance the halls … move their product, move like their product.” The workers chants hit a sympathetic chord.

One of the three founders, Dolores Huerta became a role model for women by simply asking, “What can I do to be respected at my job?” A question many women still ask, today.

In the first farmworkers’ planning meeting, Huerta counted 58 sexist remarks made by men. After she pointed it out, the numbers decreased with each meeting.  She encouraged men in charge to appreciate the power and intelligence of women: “If you have to make an important decision, and there are no women in the room, you are going to make the wrong decision.” So true!

Kristoffer Barrera’s photos and videos take us to workers in the fields, working under poisonous pesticides that infect their food and water, causing disease and death. “More Than Grapes” lets us overhear their whispered talks about America “the lonely place.”

Itliong insisted that Chavez join the strike now, but Chavez was cautious. Later, Chavez and Huerta joined Itliong and brought together Filipino and Latin cultures in the United Farm Workers—to confront agri-business. The Grape Boycott and UFW became a tidal wave that crossed America.

Director Sean San Jose pulls all the pieces together, using the superb actors’ voices to deftly interweave many stories. Although history is rich with the successes of Itliong, Chavez, and Huerta, it is lean on honoring the nameless men and women who fought for years in peaceful and tumultuous picket lines to form the UFW.

Dolores Huerta reminds us of the many workers who risked livelihood and lives: “Setting the record straight—a lot of people lost their homes and were killed, and no one knew their names.” She organized women to march on behalf of the farm workers all through California, raising the power of women’s voices.

“More than Grapes” pays homage to unnamed workers, and inspired leaders, who stand for courage and resilience in our country. Well worth a timely listen at TheatreFirst.