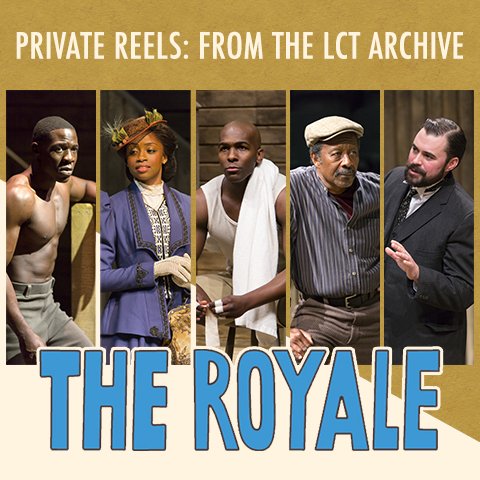 Jay “The Sport” Jackson is a hero. He knows it, everyone knows it. Khris Davis plays the role confidently, with sharp suits and supreme self-knowledge.  Jay just wants to fight for the Heavyweight Championship against the Great White Hope.

Based on real-life Jack Johnson’s 1910 Fight of the Century, “The Royale” covers two days in the life of fictional Jay, who is struggling to book a fight with the retired white champion. It would be the first Black vs. White Championship. We believe in Jay—as captivating interior monologues reveal his battle with widespread racism.

Jay wants be accepted by whites, but he is only a gladiator for their entertainment. On a stark wooden platform that serves as the practice ring, Jay answers questions from a white reporter (John Lavelle) who focuses on race, and accuses the fighter of ‘arrogance.’ But even the reporter concludes: “It won’t be a white history, it won’t be a black history, it will be sports history.”

Jay’s sister Nina (versatile Montego Glover) becomes his true opponent. Nina knows the price that innocent African Americans will pay if Jay beats the white champ. The searing exchanges between Jay and Nina reveal the deep personal cost to his family and his fans.

Jay deals with questions from his worldly-wise trainer Wynton (Clarke Peters), who reminds him: “Ain’t nobody made you the spokesperson for Colored People Incorporated.” Wynton tries to relieve Jay of that burden. Wynton’s emotional delivery of his own futile “Battle Royale”—fought to amuse jeering white overseers—highlights irrational race hatred of the time.

When Jay’s white promoter Max (Lavelle) tries to set up a fight with the former white champ, the results are inevitably insulting. We are outraged for Jay, yet again, as he is forced to accept an terribly unfair deal.

Nina’s personal struggle with racial attacks makes her both his inspiration and antagonist. “The Royale” helps us look at the roots of ingrained prejudice. Nina understands racial violence and explains it, painfully, to her crusading brother. The blows he takes and gives are all for her—but Black people will die if he wins.

As Ramirez’s script unfolds, we think of Colin Kaepernick, Muhammad Ali, and Jackie Robinson who also waged battle on the fields of sport and white hate. Ramirez uses the story of the first Black champion to discover the costs of success to African Americans. We realize, finally, that the boxer has unwillingly become The Great Black Hope, despite his objections.

The idealization and demonization of Black heroes keeps returning. Khris Davis embodies that dilemma in his thoughtful, admirable Jay Jackson. He shows that black champions march to a different drummer: they use fame to open doors—at great cost.

“The Royale” by Marco Ramirez, directed by Rachel Chavkin, at Mitzi E. Newhouse Theater, New York. Streaming at: LincolnCenter.NY – to May 16, 2021.