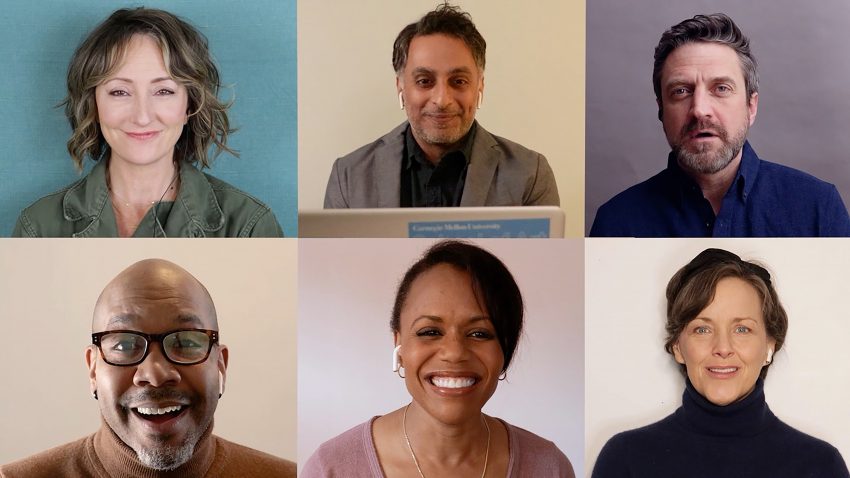 Virginia Woolf is very good at describing what it’s like to be alive and remembering fleeting moments.  Lisa Peterson’s “Theatrical Experiment in 6 Movements” based on Woolf’s 1931 novel The Waves, is a mash up of media.

Like the Power of Ten, “The Waves in Quarantine” tries to give an intimate look into the lives of individuals; then pulls back to give a broader picture. Bringing together six points of view using film, music and the actors’ process is a lot to ask of both performers and audience.

When Carmen Cusak is asked to participate, she sings: “Who’s Afraid of Virginia Woolf? I am, I am.”  And we know just what she means. The Waves is mainly focused on the interior lives of six children who grew up together near the sea. We go back and forth in time with them drawn by words on a page.

“The Waves in Quarantine,” filmed with great skill by Zelmira Gainza, presents a collage of six talented actors in their homes, patched together. The cinematographer employs transparent imagery from the 30s to recall the era. The actors talk a great deal about their process and feelings–attempting to achieve the beauty of Virginia Woolf’s text.

“The Female Gaze” takes a feminist look at the three female characters talking about their roles in life now, as opposed to 1931. When Woolf wrote The Waves, women had few options: laundress, sweat shop worker, typist.

Susan (thoughtful Nikki Renée Daniels) talks about being a mother and wondering about her place in the world. She says, “I’m jealous of my children because they get more of me than I get of myself.” Susan does need a room of her own.

Rhoda (forceful Alice Ripley), a self-proclaimed “loner,” sings: “I just want to be, like a pretty girl, let my hair fall down and wear a flower” and “The waves break, I am the foam.” I understand her to say she is a result of the wave.

But Jinny, a modern woman, feels more confident in her skin. As she flirts with an unseen presence, she asserts: “There is nothing staid, nothing settled in this universe.  All is rippling, all is dancing; all is quickness and triumph.” She is ready for action!

In “The Sun Cycle,” Louis (appealing Manu Narayan), the guy no one likes, takes us on a walk through A Day in the Life of Louis. He is lonely and hopes to hear from someone. Wistfully, he strolls around his village, jumps playfully on ice puddles, gazes out to sea.

The ending of this piece is quite moving. When he returns home, resigned to being alone, Louis gets a call with an invitation and we share his changing mood—as the music by David Bucknam and Adam Gwon perfectly expresses the isolation they each feel.

In “Absence,” Bernard (earnest Raul Esparza), who began the six testimonies, and Neville (jovial Darius de Haas) reflect on the missing “Percival,” a seventh friend. David Bucknam, the composter/lyricist of the original musical in the 90s, died in 1998.

I can’t help feeling that this whole project makes a living memorial to the composer.  I’d like to say it is also a salute to Woolf, but aside from a solid attempt by the female actors wrestling with their roles and Louis’ loneliness, there is not much Virginia Woolf.  Maybe Carmen was right to be afraid.

“The Waves in Quarantine” – written and directed by Lisa Peterson, inspired by a stage adaptation of Virginia Woolf‘s The Waves (1931), music & lyrics by David Bucknam & Adam Gwon, conceived by Raul Esparza & Lisa Peterson. by Berkeley Repertory Theatre. Streaming at berkeleyrep.org – to Friday, May 28, 2021.