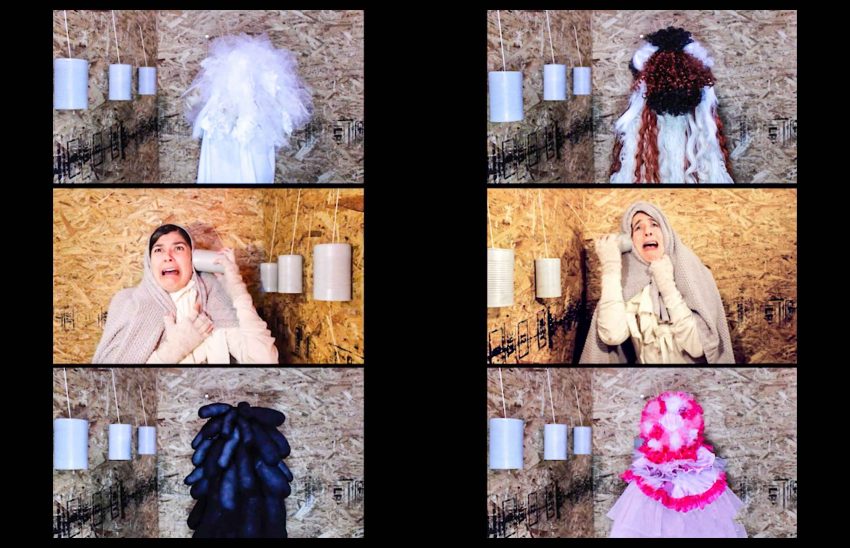 Four visiting Phantoms, and deep voices from the future, taunt imprisoned twins fearful to reunite and become one whole person. They resist moving into a new psychological and physical “normalcy,” representing what many of us are going through today.

They want to know, “How will life be different?”

They whisper to each other, mouths covered by the tin cans, their voices almost inaudible. We can hear them say, “Disappearing self”’ and “I don’t know who I’m going to be one moment to another.” Like ghosts, they feel invisible. Yet, while Ghostie cowers, Ghosty is excited to explore a new world.

The mystery deepens as the cans ring and garbled messages in different voices address them. A loud, continuously ticking clock drowns their responses. A deep voice speaks through hand-held mirrors from the future; then a phantom appears on the screen, and we are carried into their illusion, and their message.

Mugwumpin’s Black Bubba, the first apparition, is draped head-to-toe in thick clumps of black cloth. He raps, “This is real,” with photos of cemeteries, immigrants, and darkness flashing in the background. As we relive the horrors of the pandemic year, hard rock music diminishes the feelings.

Christine Crook’s has created artistic “out of this world” costumes for Mugwumpin’s four Phantoms, capturing the essence of each monster’s message.

In response, the trapped pair touch their faces, eyes, and noses, breaking through invisibility, asking “Who am I?”

The other three apparitions spew sentences that are sometime so phrenetic, they are hard to follow. Yet, at other times, their rap is crystal clear and melodic, capturing our undivided attention.

Studying themselves through the looking glass, the twins wave to each other, recognizing the other part of them. Ghosty feels the change; Ghostie struggles with riddles from the voice in the future. “Step inside your ghost, and you will see all.”

An “Exit Eject” sign falls in front of them after the huge fuzzy pink teddy-bear illusion encourages them to move on, relax, and resist complacency. But they hesitate to cross over.

We, too, are at that spot now, exiting into the world, unmasked, visible, but still fearing the future. I recommend visiting this fifty-minute wonderland of surprises—a fantastic voyage into parts of ourselves during the Covid crisis.

“Phantasmagoria” – A collaborative film by Cutting Ball Theater, Bay Area Theatre Cypher, and Mugwumpin, co-devised by Ariel Craft, Akaina Ghosh, Maya Herbsman, and Maria Marquis from Phantasmagoria, Alice’s Adventures in Wonderland, and Through the Looking-Glass by Lewis Carroll, directed by Ariel Craft. Streaming at: CuttingBall.org – to May 23, 2021.