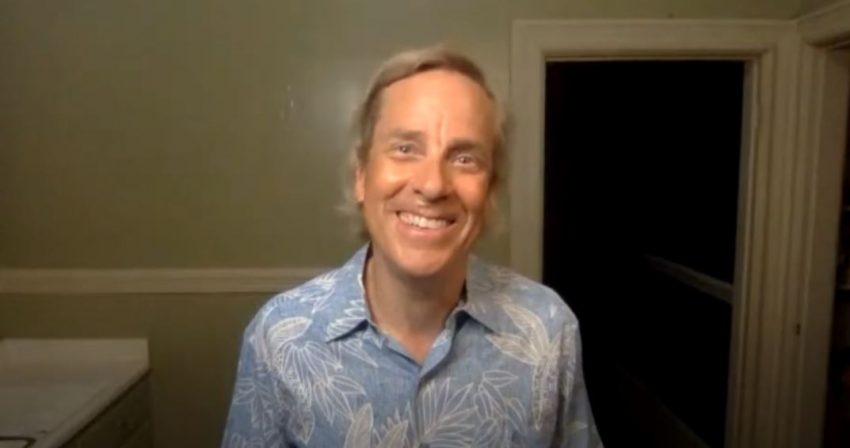 In “The Farm,” Fisher’s romantic bicycle trip to the sun-drenched Stanford campus reveals a dark side of the famed university. For over a year, John Fisher’s 60+ weekly solo shows have featured his love for local buildings and history, for romance and scandal.

Fisher starts with his lucky meeting with his husband-to-be, Michael, as students at UC Berkeley. Whimsically, they navigate the waters of early dating, endearing in their innocence and awakening love. Fisher weaves the story of his love into the play, like nighttime dreams broken by daytime discoveries.

Fast forward to their living in the cool Haight and taking a bicycle trip to sunny Palo Alto to escape the San Francisco fog. Fisher enthuses about the beauty of the Stanford campus—its impressive buildings, free art museums, and lush greenery.  The imposing Hoover Tower looms as an architectural wonder as they explore Stanford’s expensive private school realm.

Fisher wonders which is better: CAL, the public uni, or Stanford (“The Farm”), the exclusive private uni. He admires the edifice dedicated to Hoover; but he tells us that Hoover’s resistance sparked the Depression. In a clever comic vein, the Fisher character exposes Stanford as a deeply conservative school, still linked with the mantra: “Free Enterprise—Less Government.” Fisher’s naïve narrator pulls back the private school curtain to reveal some unpleasant connections.

Fisher revives the March 30, 2016 news story of Chanel Miller’s rape by a Stanford swimmer. Brock Turner. Turner, a 19 year old freshman with Olympic aspirations, was caught raping the unconscious Miller behind a dumpster. He was caught because two Swedish grad students chased him down and held him until police arrived.

The rape story suggest a downside to extreme privilege. Fisher shows us Chanel Miller’s recent art work and read from her best-selling,  revelatory memoir called Know My Name. Miller’s groundbreaking mural at the Asian Art Museum has brought the terrible case back into the limelight.

Despite the overwhelming evidence, Turner only served three months. The judge was later voted out of office.

Fisher claims that this case at Stanford strips the veneer of gentility from the private school. The prestige of the Hoover Institution with fellows like Condoleezza Rice, George Schultz, and Covid-denying Dr. Scott Atlas seem like facades to hide the horrors inflicted on innocent people, like Miller.

“The Farm” uncovers more open secrets when Michael and John set off in search of the Martin Luther King, Jr. Institute at Stanford. After careful hunting, they finally find the MLK Institute housed in a shabby, one story house on the edge of campus.

Fisher shows us photos of the run-down building and compares it to the lofty Hoover tower. He says that the University has given little attention to continuing King’s work. Fisher’s bike ride to “The Farm” turns on its head to reveal a bastion of privilege for 7,000 undergraduate students. He makes his point when he shows us sculptor Benny Bufano’s neglected statue, as well.

Fisher’s naïve cyclist discovers that private schools quietly disregard ideas that threaten the status quo. We heartily recommend going with Fisher on his bike ride from public to private, to assess the curious contradictions—it’s a brilliant trip!

“The Farm” by John Fisher, by Theatre Rhinoceros—Streaming at: TheRhino.org