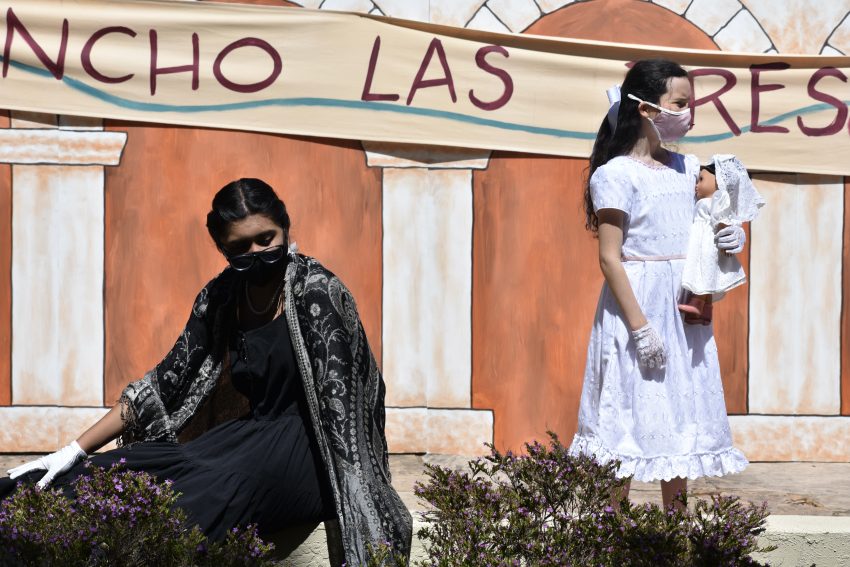 In “Esperanza Rising” at Teatro Visión, playwright Lynne Alvarez shows how racism comes from early training—and how we even use that racist brainwashing against ourselves.

Esperanza, a spoiled Mexican “princess” can only see the world from her privileged point of view. She has no compassion for servants, disdains their children, and abhors the poor. She cannot see beyond her own self-interest. But Esperanza still means “hope.”

Esperanza’s childhood friend Miguel (Nathaniel Martínez) points out that his skin is dark, which he believes signifies he is destined to hard labor in the fields. Miguel also believes that Esperanza’s fair skin signifies her nobility and wealth. If you watch a Mexican soap opera, the leading lady is always fair, typically blondish with blue eyes. Spanish colonization still influences New World beauty standards.

Being Latina, I am very aware of machismo and colorism in my culture. Not much has changed in regard to favoring European faces and hues above indigenous features. Latina women still suffer from these racial prejudices.

I always wondered why my mother and her friends did not look like any of the leading characters in the Tele-Novellas. Only when I grew older did I understand the microaggressions from my people.

Disaster strikes when Esperanza’s father (Kimberly Topete) is killed by bandits. Before the dirt settles on Papi’s grave, shady Tio Luis (David Zamora), Papi’s brother, slides in. He intends to marry her mother Ramona (Kaitlyn Robles). Luis claims it’s all love, but we know that the uncle wants control of the fertile land.

When Ramona refuses, Esperanza is forced to flee her mother and country. She ends up in the migrant labor camps of California, barely surviving. So … what happens when a spoiled Mexican girl ends up picking lettuce in an alien country?

Maya Xochitil White plays the inspiring union organizer Martha, who takes Esperanza undr her wing.  Passionate Martha works tirelessly to unionize the farm workers. And she challenges Esperanza to learn those skills–teasing and calling her a “princess.”

Martha breaks stereotypes by challenging tradition. She demands respect. and takes on leadership–typically reserved for men. Martha helps the workers dream of a new reality where they are treated as human.

At age thirteen, Esperanza transforms herself from a bratty child who cannot mop a floor to a compassionate young woman. As Esperanza works with displaced people in the migrant camps, her sheltered ideas begin to shatter.

She gives away her father’s final gift, an expensive porcelain doll, to a poor little girl. Esperanza willingly sheds the last physical object from her wealthy past, joining the migrant workers as her new family.

“Esperanza Rising” is about setting roots in strange soil. The talented young cast shows that overcoming trauma and making community must be our future, together. A charming show for all ages.

“Esperanza Rising” by Lynne Alvarez, music by Victor Zupanc, based on the book by Pam Muñoz Ryan, by Teatro Visión with Plays for Young Audiences. Streaming at: TeatroVisión