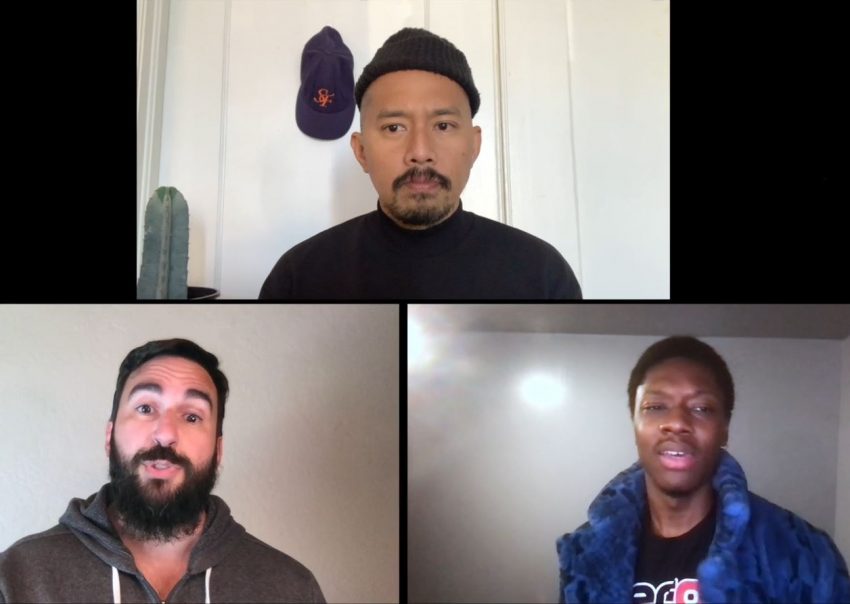 Tom Swift’s striking new play at TheatreFirst, “A Marriage,” leaps off the screen and into our hearts—with daring intimacy. In this powerful comedy, three inventive actors capture a gay marriage evolving over four decades. And they play themselves as actors, too

Daniel (Michael Curry) and Richard (William Giammona) meet in a bar and after one night, they decide to declare their love. Why not? It seems like a joke, but that one risk shapes 40 years of their lives, profoundly. Developed and briskly directed by Brendan Simon, and artfully designed by Ben Euphrat, “A Marriage” continually depicts Daniel and Richard challenging and teasing each other with laughter and tears.

Their conversation ranges from sex to music to movies, as they draw each other out with consummate charm. Their rapid-fire dialogue exposes them, as they learn about each other’s tastes. Each step forward is dangerous and unexpected: They debate about Streisand vs. Sinatra, Steven Sondheim vs. Michael Bennett, Bob Fosse, Lady Gaga—you name it—gay ‘dishing’ at its best.

In a hilarious preshow scene, the actors play themselves, delightfully. Jomar Tagatac shines as the “swing” actor, playing a grumpy stage manager. The shape-changing Tagatac also plays Daniel’s mom, Perry the hot neighbor, and Steven, their “son”—with amazing versatility. Tagatac goads Daniel and Richard with quips, glances, and queries—mastering the language of  love.

Michael Curry is endearing and funny as Daniel, who uses his heart to experiment with life. And William Giammona keeps surprising his lover with acceptance and daring.

Over three full acts and a few hilarious intermissions, we enjoy the actors dissing each other while they change clothes. We are embedded with them as thrilling actors and fascinating personalities.

Daniel may be the younger and more adventurous; but Richard rises to the moment, pushing their intimacy along. They fight, quibble, joke, tease, and equivocate:

DANIEL: What about retirement? Retirement will be better, right?

RICHARD: No. No. It’s just more of the same, except we don’t have to get dressed for work. I mean there may be more gardening and community theater. But that’s about it.

Their personalities grow and flower under interrogation, making their union ever stronger—an amazing peek into intimacy through comedy. Swift reminds us of the comedy of Oscar Wilde or Edward Albee, using language to explore character. The design and ideas broaden out to include all kinds of love. You just want to hug these guys.

Director Brendan Simon steers these three accomplished actors home to our hearts. With natural and quick and loving words, they mark out a space where we all can live together, at peace.

“A Marriage” by Tom Swift, developed & directed by Brendan Simon, visual design by Ben Euphrat, from TheatreFirst, Berkeley. Streaming at: TheatreFirst.com – to September 1, 2021.