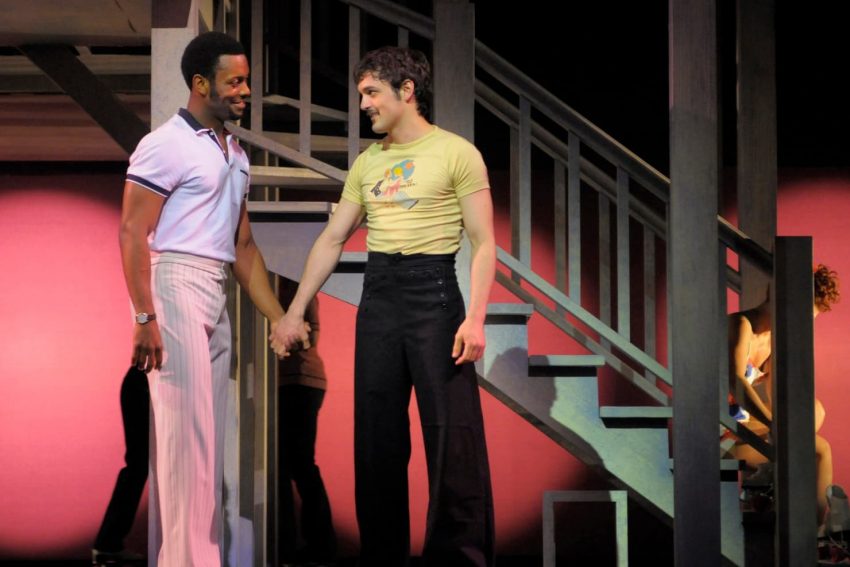 Armistead Maupin’s story of newcomers and old-timers in 70s San Francisco was transformed into a musical in 2011. With song and dance, we meet neighbors who bond to make a family at mysterious Anna Madrigal’s multi-story house at 28 Barbary Lane, S.F.

The musical follows naïve Midwesterner, Mary Ann Singleton (innocent Betsy Wolfe), as she converts her vacation in San Francisco into a permanent move. She is slow to process the existence of gay and trans people in The City. Cautiously, she takes in sexual liberation for straight people, during the sexual revolution.

Singleton explores relationships while watching those around her flip lovers on a dime, falling in love as quickly as they toke joints. An innocent Little Red Riding Hood, she sings about her confusion, with a lovely voice.

Although most of the music lacks range and depth, Wolfe’s solo “Paper Faces,” sung after the break up with Norman Neal Williams (Manoel Felciano), stands out. “Paper Faces” captures the many faces people hide behind as disguises—to protect themselves, and leave them untouchable. We feel the emotional strain of shallow relationships and sexual exploitation in most of the characters

A plethora of songs overwhelms the plot, but Larry Keigwin’s choreography deserves commendation for its 70s disco and early rock feel. Keigwin brings back disco dancing’s flash and dash.

Many of the stories—like Singleton and her friend, Michael “Mouse” Tolliver (versatile Wesley Taylor) are left hanging like question marks in the fog. We want to connect with them individually, but there are just too many. The relationship between Edgar Halcyon (anxious Richard Poe) and Madrigal is the welcome exception.

The plot seems thin, even with its surprise endings, which did not grab me.

Director Jason Moore does an admirable job of holding together the many pieces of this musical.

Much has changed since the 2011 show, including laws and mores. Although everyone will have their sexual romps, gay folks are involved with deeper and longer family connections than we see here—including marriage and family.

“Tales of the City” depicts the sociology of a time when sexual freedom often meant experimentation not tied to love. And gender constraints led to the fear of being oneself, hiding behind “Paper Faces.”

“Tales of the City” is light and upbeat, and it faithfully depicts a by-gone time in San Francisco.

“Tales of the City, The Musical” – libretto by Jeff Whitty, music & lyrics by Jake Shears & John Garden, based on Armistead Maupin’s Tales of the City, directed by Jason Moore, by American Conservatory Theater, San Francisco. Streaming at: ACT-SF – to June 27, 2021.