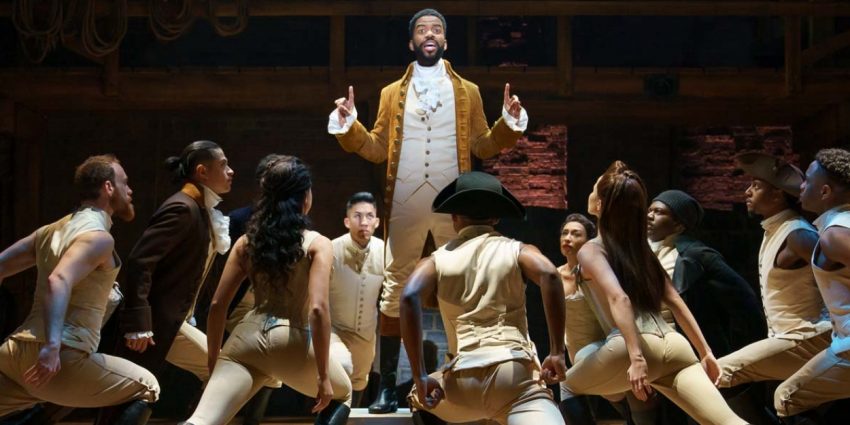 The touring company of “Hamilton” in San Francisco boasts an exciting diversity of singers and dancers. Much like the Bay Area, the cast is multi-cultural and phenomenal—like Lin-Manuel Miranda’s musical, itself.

Miranda’s ground-breaking show about the American Revolution—in rap, jazz, and ballad–has revolutionized the American musical. Until now, there has never been a show like it, casting black and brown actors as Founding Fathers and Mothers. “Hamilton” gives people of color a chance to see themselves as basic to America, no longer left out.

Because the U.S. was built on the blood, sweat, and tears of colored bodies, Miranda puts us all back into the narrative.

The show breaks tradition by casting brilliant actors of color as George Washington, Alexander Hamilton, Aaron Burr, and the Schuyler sisters. Their songs and dances range from street style to hip hop and jazz hands.

For me, “Hamilton” reinterprets U.S. history in a modern style—truly a show for the people. Powerful romance, drama, and rivalry exhilarate and inspire long after the curtain calls.

At the tender age of sixteen, smart, scrappy Alexander Hamilton (forthright Julius Thomas III) emigrates from the Caribbean to New York City. Teen-aged orphan Alexander dreams of being a soldier in the coming Revolution.

When he meets his lifetime ‘frenemy’ Aaron Burr (mesmerizing Donald Webber, Jr.), Hamilton confronts his complete opposite. Burr is careful and practical; and he is shocked by Hamilton’s contrasting honesty and frankness. They present conflicting visions of America, revealing a basic split between caution and daring.

When Webber, as Burr, sings “Wait for It,” we sympathize with the man who lives under Hamilton’s shadow. Webber helps us identify with Burr, rapping, “I am not falling behind or running late / I’m not standing still,” as he tries to justify his “wait and see” stance.

“Wait for It” offers insights into the tempest locked behind Burr’s smile. We can understand Burr’s major FOMO (fear of missing out) vibe.

They even compete for the enchanting Schuyler sisters. Angelica (noble Marja Harmon) brings me to tears with her solo “Satisfied,” a touching tribute to her sister Eliza (impressive Victoria Ann Scovens). Women inspire and direct in Miranda’s world, too.

When powerful Darnell Abraham strides on as George Washington—with a strong baritone and perfect poise, he occupies the stage, magnificently. The vision of a Black Washington makes us think about his contradictions on slavery, as well as his singular vision for America.

As many Hamilton-lovers will testify, the soundtrack alone leaves us breathless. I’ve been listening to it on an endless loop while jogging and studying for years now. But to see it live with wonderfully diverse artists hits new heights.

Draped in a lavish red and white robe, King George (hilarious Rick Negron) becomes a parody of British imperialism.  Drunk on power, the King is obsessed with controlling his colonial subjects.

When King George bitterly sings,“You’ll be Back,” I was equally laughing and fearful. With lines like “I will kill your friends and family / To remind you of my love,” the impotent King bellows out his twisted confession of “love” for the Americans.

Here’s a musical that can preserve and transform and inspire—Welcome to the New American Revolution.