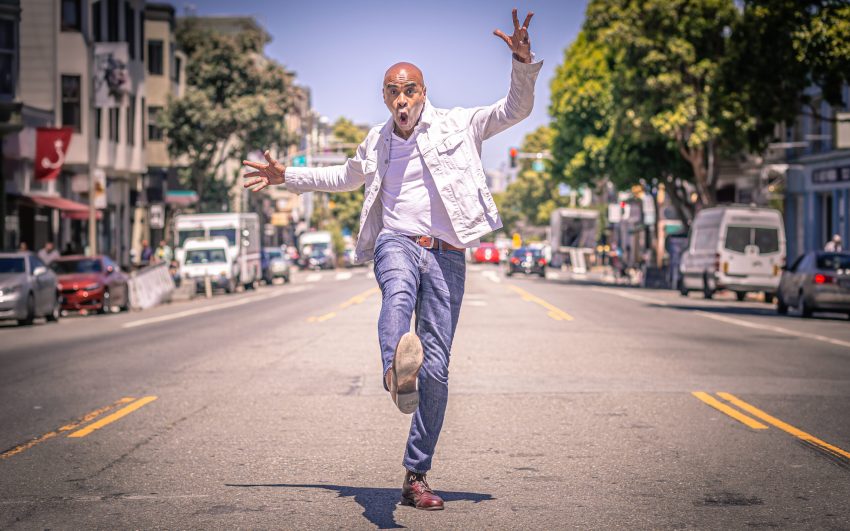 Don Reed Says What We’ve All Been Thinking

Don Reed does it all—he stars in TV, movies, stand-up, and just plain showing up—always with a great presence, a lilting voice, and a warm theatrical hug.

There he is in L.A., lined up to get the shot—but he has to develop strategies to keep eager people from bunching up against him in line—”Don’t stand so close to me” doesn’t seem to work.

He waves his arms, he talks loudly on the phone, finally he shouts, “Six Feet, Get Away!” He wants to know why people are so dense in this “PAN-PAN-PANdemic.”

If you see a Don Reed show, you will emerge happy and enlightened. That’s a rare gift—surpassing most overpraised stand-up comedians.

Reed is a rubber-faced natural comic, full of spot-on acrobatic motion, with genius comedic timing. We see how he lives his life, what he notices, and how he reacts to the silliness and pettiness around us.

Don Reed is an Oakland guy—born and bred in the hood, raised as a Jehovah’s Witness. Reed serves it all up on a rich comic platter. He recreates his Oakland life with a refreshing burst of reality.

Clearly, he was a brilliant kid, impressing his teachers, becoming a prize-winning debater, speaker, and actor. He has gone to success on TV and film, but he comes up from L.A. to sharpen his edge and share his insights with the lucky hometown crowd. Anyone who has come up the hard way will appreciate Reed’s comedy.

When Reed recalls, in his easy way, encounters in Walgreen’s during the early days of the Pan-Pan, we see him trying to talk sense to harried clerks who have no antiseptic alcohol or paper towels on the shelves. But his charm soon transcends the shortage, and the clerk breaks out a  secret stash.

We get the sense of a kid consistently surpassing his own expectations. Luckily, beloved Professor Tim Miller guides him to classes, to debate contests, and to UCLA., where he never expected to go.

The striking story of his road trip to Vegas with his school’s $600 to enter a speaking competition hits a chord. As a youngster, Reed succumbs to Vegas temptations. He barely manages to get to the contest—but he still manages to win!

He is warmly grateful to the professor and the uncle who made it happen for him. Miller reminds him that he represents Oakland, always.

In Reed’s comic portrait of the artist as a young man, we see the young Don dressing up in flashy color-coordinated orange hat and shoes, trying to fool his girlfriend. We can feel his slow, grudging adjustments to other people’s needs, even while practicing his charms. His self-revelation is inspiring and funny.

It’s a comedy of manners, enacted by one sharp and funny guy. I will be there for Don Reed’s next solo show—whenever he comes back to the hood. Don Reed is the real thing—and a welcome treat, anytime. He lifts our spirits.