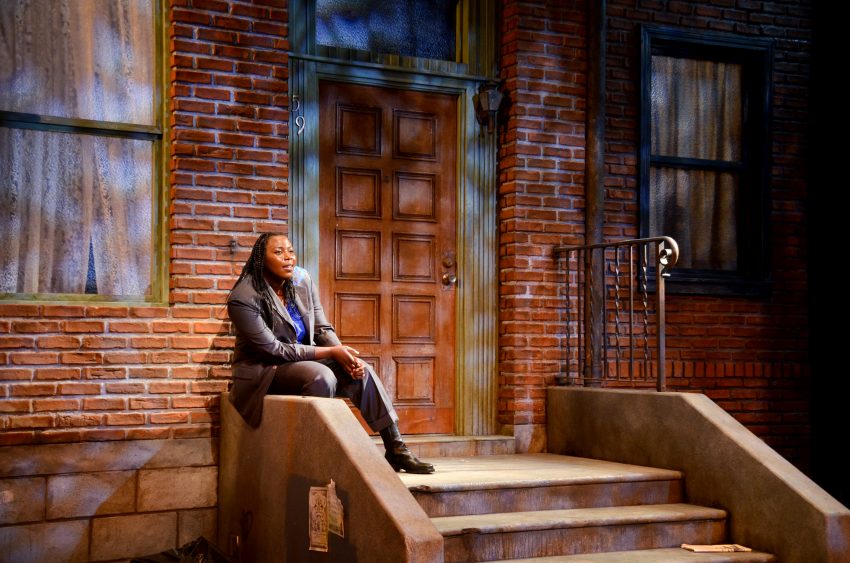 “Stoop Stories” could be called “The New York Odyssey” because playwright/poet Dael Orlandersmith has created a tapestry of encounters that bring to life real New Yorkers: a Holocaust survivor, a youthful poet, a Puerto Rican ‘cool’ kid, and an oldster seeking Nina Simone.

How can we help but join in a heartrending renewal of a Harlem that was—the Harlem of Billie,, Dinah, Aretha, Langston, so many more …

It’s an epic story, dramatized on film by superb actor Jeunée Simon, a Bay Area treasure, who takes on the character of a neighborhood bard. Simon cycles through an array of significant people—from a little girl to an washed up rock star. With her dark suit and intimate tones, Simon reveals the essence of each person she inhabits.

Orlandersmith’s 2008 play has had many performances by the poet herself—in New York, D.C., Chicago, Pittsburgh. Her New York poem, told in lilting almost rap rhythms, entices us with music from the streets and a literary twist. Surely, Orlandersmith is the Homer of Harlem—and Jeunée Simon makes a convincing troubadour for these touching stories.

Directed with finesse by Elizabeth Carter, we find Aurora transformed by a true-to life reproduction of a brownstone house, complete with red-brick facade, wooden window frames, and a cement stoop. Simon strolls the street, shape-shifting into vivid characters, drawing us in with impressions, emotions, and poetry.

One of her heartfelt characters, Herman, a Polish Holocaust survivor, recounts meeting Billie Holiday in a jazz club in the 50s. He is thrilled to have a drink with Lady Day and have her dedicate a song to him. She is in her last days and blurts out: “I can’t think of a song to sing…” Herman loved Holiday, who died soon after at age 44. What a memory she is to him.

Herman still loves his Jazz, and dreams of the beautiful Black girl he wanted to marry but they were stopped—a sad history he confides in us.

Then, there’s Hector—only 16, a slip of a boy—trying to be Way Cool. Hector embodies a literary “meringue—Puerto Rican and Black, Salsa and Soul”—ardently sniffing the smells of Harlem.

Simon becomes Benilde, a 13-year-old girl who says right out: “I’m 13 and bleeding—I’m a girl now, a woman…” Nilde tells us stories of her friends, Sugar and PeeChee, and how they struggle—while Nilde dreams of poems.

Simon spurs our empathy: “The souls of young boys are trapped here / under the hoods of stolen cars…” Simon becomes the Bard of the streets, the coffee shops, the Disco Donuts, the basement clubs….

When an old man travels on “two trains” all the way down from Harlem to the Village—to see Nina Simone sing, he is stopped by her cancellation. You can feel his bones creak as he takes the subway back uptown.

As one little girl goes to the library and smells the books, she says, “It’s like inhaling words, words…” Listening to Jeunée Simon feels like inhaling the sweet smell of jazz.

Cast: Jeunée Simon (as everyone).