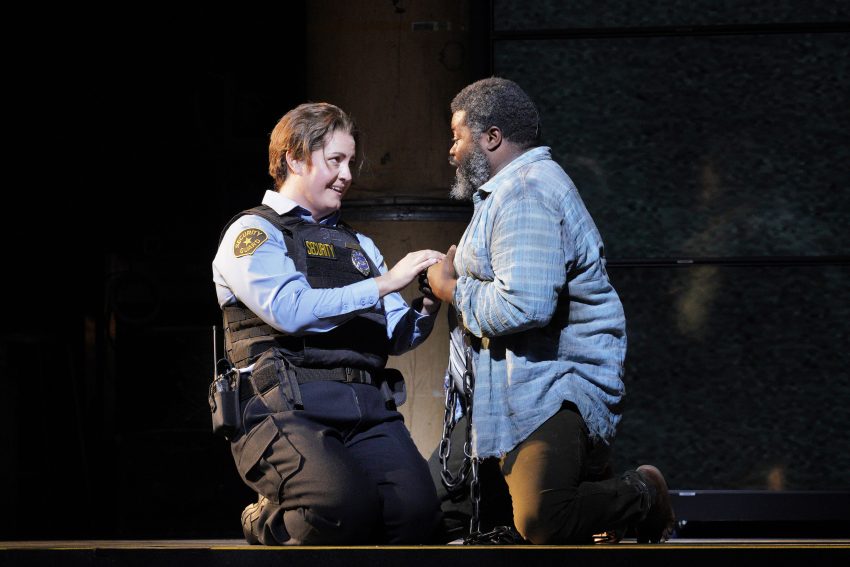 Beethoven, with help from friends like Matthew Ozawa and the cast, orchestra, and crew of SF Opera gave me two-plus hours of unadulterated joy. Ozawa’s new “Fidelio” updates Beethoven’s opera about triumph over tyranny—delivering a contemporary win over political injustice.

For me, the biggest payoff is the combination of a happy ending for all and the sensitive, rich score. The music celebrates emotions, from utter despair to uplifting glory. The joyous libretto of triumph over oppression is perfectly matched with Beethoven’s orchestral genius. I feel the dark feelings of despair and sacrifice along with the jubilation of ultimate justice throughout the score. Conductor Eun Sun Kim’s control and strength give wings to the orchestra, translating Beethoven’s masterpiece into raw human emotion.

Simply, “Fidelio” is the story of Leonore, a wife who pretends to be a male prison worker to break her political dissident husband Florestan out of jail. Ozawa cleverly employs a trick to introduce the plot—as the lights dim, a giant black and white photo of a woman appears. As I watch, a female and male figure meld into one person.

With convincing gender fluidity, soprano Elza van den Heever brilliantly plays both Leonore and Fidelio. The union of these two characters, each with righteous causes—Leonore’s love and Fidelio’s initiative—make her both heroine and hero. Van den Heever sings both parts with elaborate emotional resonance, transmitting pain, fortitude, and jubilation.

The struggles in “Fidelio” make the ending so sweet, and the libretto is thick with rich, complex characters. Rocco (bass James Creswell) sings beautifully, with deep compassion for the inmates; while Greer Grimsley’s Pizzaro, the corrupt tyrant, booms with frightening passion. Grimsley quadruples the tension with his rich, robust bass-baritone.

The jailed and starving Florestan, embodiment of the resistance, is sensitively played by acclaimed tenor Russell Thomas. His velvety, yet powerful aria communicates pure despair, and we all feel his pain and suffering. The fact that Thomas can sing with such gusto while sitting crouched on a stool is mindboggling. His first aria of three, “Gott! Welch Dunkel Hier!” (“God, what dark here!”) marks the pinnacle of his pain.

The end of Act One is a true high point for me. Urged by Fidelio, Rocco releases all the prisoners for a brief taste of freedom. Beethoven’s music delivers a tender passage with men, women, and children released from their cells. The entire Opera House beams with joy at that moment.

Emotions culminate in the second act—a celebration of courage, love, and triumph—with superb performances. Florestan and Leonore finally sing tenderly together: “Wer Ein Holdes Weib Errungen” (Whoever Has Won a Devoted Wife.) Their exuberance meets the full force of the production—as all the prisoners (the SF Opera Chorus) dominate the house with sound and celebration. Cheers to Chorus Director Ian Robertson for his forceful direction.