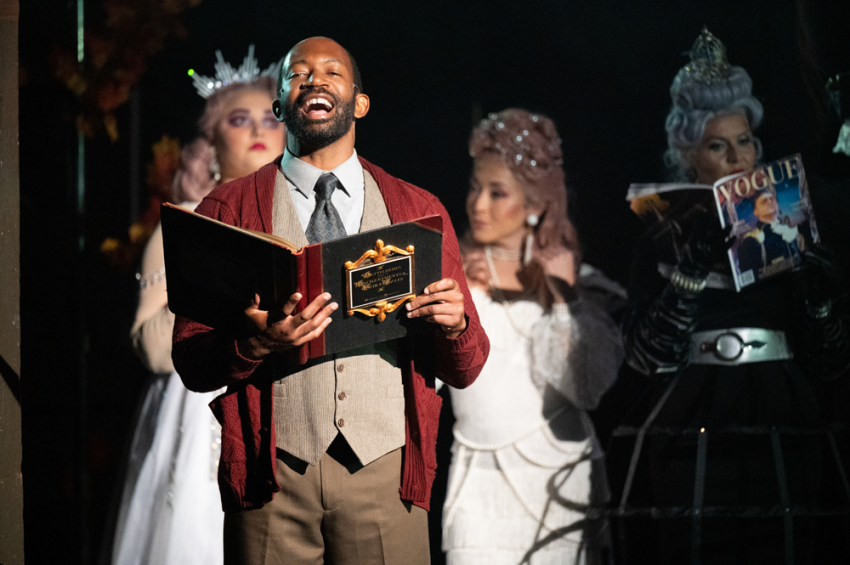 Everyone I know either loves “Into the Woods” or hates it. When I saw it as a teenager I hated it.  Only after I worked on a production, did I fall in love with Sondheim’s weaving of our lives into classic fairy tales.

At first, the musical  seems deceptively charming and whimsical—a cornucopia of familiar fairy tale characters weave in and out of each other’s stories. But the cutesy promise of a happy ending fades, promising a a more complex story.

The characters in “Into the Woods” face problems that starkly mirror our own: infertility, abandonment, possessiveness, manipulation. Even the parents who try to protect their children from harshness, often become the sources of childhood trauma.

As someone who is both excited and terrified to have children one day, I appreciate the authenticity of Sondheim’s characters in fantasy settings.

Berkeley Playhouse wonderfully captures the magic that makes “Into the Woods” a classic musical. As we walk into the Julia Morgan Theater’s grand redwood hall, its lofty beams seem made for this show. The hall is covered in autumnal orange leaves, casting a soft glow. The beautiful scenic design by Sarah Phykitt is handsomely accented by John Bernard’s warm lighting, mixed with striking purples.

All the members of the vocally talented 17 person cast has moments when they shine.  Standouts include Reggie D. White as the Baker, whose soulful rendition of “No More” soars with feeling, bringing me to tears.

As the Baker’s Wife, Rebecca Pingree delightfully mixes her powerful singing with witty delivery. From “Jack & the Beanstalk,” in “Maybe They’re Really Magic,” she sings, “If the end is right / It justifies the beans!” evoking laughter with eye-rolling puns. White and Pingree have a spirited chemistry, even when they bicker.

When Alexis Lazear enters as the Witch, her imposing presence sweeps the theater. Her costume and makeup design by Katie Dowse, Lauren Fitts, and Lazear give the Witch threatening birdlike features that hypnotize us. Lazear captures the essence of the Witch’s sorrowful ballads,“Children Will Listen” and “Last Midnight,” belting like a pro.

Director Alex Rodrigues offers us new insights. My feelings have changed from my teens to late twenties, and fresh perspectives emerge.” I found myself connecting with the Baker, who, even before he’s had a child, desperately wants to be a good father. He’s terrified he’ll make the same mistakes as his absentee father.

No matter your age, “Into the Woods” offers poignant moments. As theater returns, don’t miss your chance to see this vibrant new production at Berkeley Playhouse.