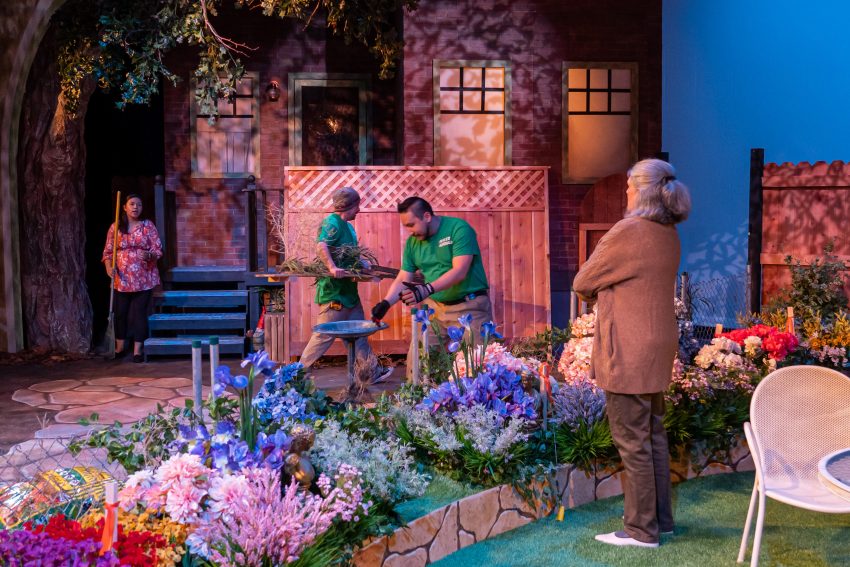 Karen Zacarías Questions the Ground Beneath Our Feet

by Ian Waters
In these turbulent times, political crisis reaches from climate change right down to our own backyard gardens. City Lights Theater Company, in San Jose, has created the perfect environment for Karen Zacarías’ “Native Gardens” to plant serious and comic questions in our minds.

Although we can sympathize with the two suburban couples, I feel the older couple exposes outdated beliefs we can laugh at. However, the Del Valles get to make all the positive points that might just save our environment. It’s fun to follow the debate and laugh at their inevitable conflict and inspiring resolution.

At times the writing feels somewhat forced, favoring an exploration of political nuance over the subtleties of conversation.  However, this sacrifice is necessary for Zacarías’ exploration of white privilege and native cultures.

The emotional dispute between neighbors over land ownership reminds us of Indigenous people’s land rights, as well as the gulf between generations and races. While the few feet in question belong to the younger Del Valles, the older Butleys feel entitled. They’ve been privileged for so long they reject the property lines.

The status quo quivers as their unequal battle begins.

The Butleys treasure their “perfect” flower garden; while the Del Valles want to nourish the ecosystem.While Frank’s garden seems ‘traditional’ and certainly beautiful, the play challenges the very notion of tradition. Frank’s garden full of peonies and English ivy is far from a ‘native’ garden. His rejection of native plants is heart-breaking.

The Butleys embody the status quo, she’s an engineer and he’s a former bureaucrat. Virginia fought sexism for years and Frank insists that his garden stay put. He’s temperamental— downright childish at times. Lawson and Smith make them individual, emotional, and convincing.

Pablo comes from Chilé, the son of a rich man; disowned for marrying “a commoner.” As an ambitious new lawyer, Leben gives a charismatic performance, with confident bravado in his voice when addressing his neighbors, and a gentle sympathy talking with his pregnant wife. Pablo is determined to take what is his, and not let anyone get in his way.

Osegueda makes Tania, born in New Mexico, empathetic, independent, and righteous. We can feel how many times she’s had to say, “I’m not irrational. I’m passionately rational.” Her plan to create a garden of native plants wins our hearts.

In New Mexico, Tania’s family owned their land long before it became U.S. territory. She is writing her anthropology thesis claiming that identity is based on geography. Tania wonderfully embodies the strands of struggle in “Native Gardens.” For a witty and enjoyable comedy about where we are now and where we are headed, Zacarías has found the perfect symbol in their gardens. She shows us how to laugh at their thorny dispute.