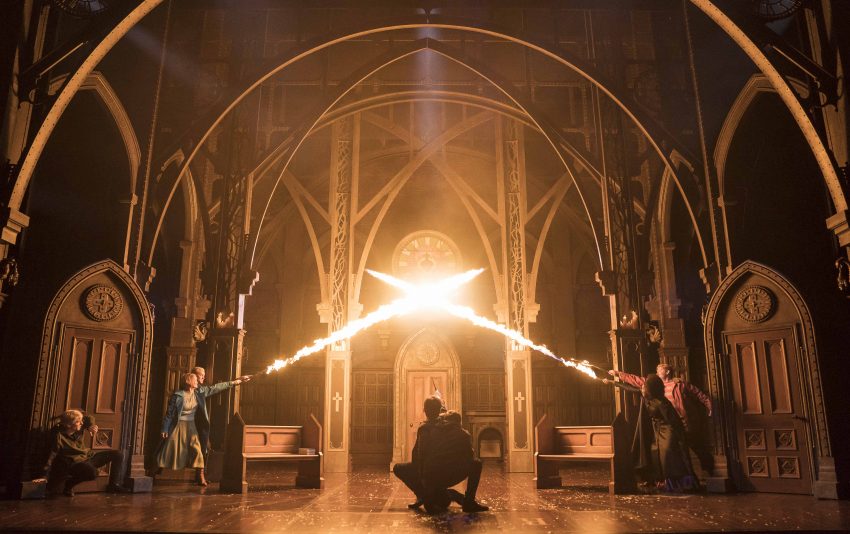 I was three years old when the first Harry Potter book was published. I remember begging my mother to read just one more chapter before bedtime. Jump to summer 2011— at sixteen, I make the evening news for camping out to see the final movie.

Now, “Harry Potter & the Cursed Child” by Jack Thorne brings that jaw-dropping magic to life, designed by master magician Jamie Harrison. Confronted by incredible wonders onstage, half the fun is trying to figure out how they do it! When you think you’ve seen the coolest thing, the next scene takes your breath away.

Wizards transform into other shapes right before your eyes and toss fireballs so hot you can feel them leap across the stage to the mezzanine. One of my favorite effects shows three wizards get magically sucked into a telephone booth, their robes disappearing in a swirl.

So many of my generation have stories about how Harry Potter has inspired them. Beyond the astonishing effects, I believe the greatest achievement of “Harry Potter and the Cursed Child” will be inspiring a new generation of theatergoers and theater makers.

Apprehensive about attending Hogwarts, anxious Albus Potter (affecting Benjamin Papacs) bristles under the weight of his famous father Harry (superb John Skelley). Albus and Harry, son and father, still struggle to understand each other. The father’s early adventures in facing down a Dark Lord did little to prepare him for parenthood.

My favorite scene comes at the end when Harry and Albus have a heart to heart. They touch on themes of loss and sacrifices that we undergo while trying to do “the right thing.” Skelley and Papac beautifully reveal the vulnerability and insecurity behind a hero and his son.

On the Hogwarts Express, Albus makes a friend, the charmingly neurotic Scorpius Malfoy (scene-stealing John Steiger). Scorpius empathizes with Albus, sharing his desire to shake off a notorious family name. As a pair of loveable losers, Papac and Steiger have bewitching chemistry, and I would happily watch more of their adventures.

Engaging characters and high emotional stakes made the original Harry Potter novels and films enormous successes in the first place. Yes, the wizard battles were cool, but we were heavily invested in the friendships between Harry, Ron, and Hermione.

If the plot of “Cursed Child” focused more on characters’ relationships, I would enjoy the story even more. But much of the three-and-a-half-hour runtime is dedicated to whacky time-travel shenanigans, and a convoluted plot about evil Lord Voldemort’s secret child.  Often, I feel that four or five different plays are crammed into one—making the plot rather baffling, even for fans.

If the show were called anything other than “Harry Potter,” I’m convinced people would be less forgiving of the weak story. Yet, when you combine a large and loyal fanbase with the excitement of seeing live theater again, even a disgruntled Potterhead like me must admit that the magic in “Cursed Child” makes me feel like a kid again.