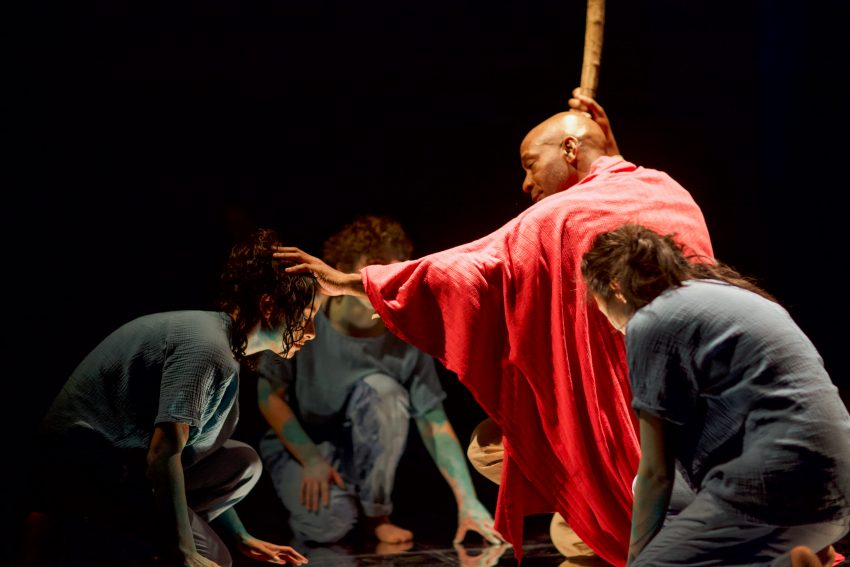 I’m always drawn to Oakland Theater Project productions. The entire team typically overflows with talent and intelligence, bringing a cultural sensitivity to everything they do. Each production is spot on with the issues and emotions of the present day. OTP’s production of Shakespeare’s “The Tempest,” which opened on Friday, February 25, is no exception.

With Vladimir Putin’s shocking invasion of Ukraine, the theme of power madness takes on a fresh, chilling, and sickeningly relevant importance. Shakespeare’s all powerful sorcerer Prospero, the exiled Duke, also falls prey to his hunger for power. Prospero invents a conflict by conjuring a tempest to capture his foes.

Director Michael Socrates Moran’s production of “The Tempest” highlights Prospero’s intoxication with absolute power, as well as his final reckoning. As Prospero, powerful Adrian Roberts uses sorcery to control both land and sea. He whips up a violent storm on a small island to control his daughter, his servants, and his enemies.

Roberts brilliantly plays both Prospero and Caliban, the indigenous islander and slave whom he calls “monster.” But assigning the opposing roles of master and slave to one actor often feels awkward and inappropriate.

Director Moran’s set is sparse—a bright ocean-blue painted wall at the edge of a dominating mirror-floored stage. Actors splash water out of bottles into faces, mimicking the waves of the ocean. These are the only elements offered to suggest we are on a remote island, but it wasn’t enough for me. The stark, symbolic setting distracted me from the evolving story.

Prospero’s wizardly power shows up best via the flashing lights that represent his mystical control. The most interesting part of the staging is Prospero’s long, elastic, burgundy-colored robe that is stretched and bound around Roberts to embody his transition from Prospero to Caliban. The transformation of characters is visually gripping.

Moran divides the fairy Ariel, Prospero’s reluctant minion, into three roles. Ariels #1, #2, and #3 are played by Sharon Shao, Romeo Channer, and Carla Gallardo, respectively. Prospero frees the enslaved Ariels in exchange for their service, but the intimacy of the relationship is lost here among the three different fairies. The three Ariels prance around the stage in blue and white body paint, dressed in decorated surgical scrubs. But I find the costumes more bizarre than magical.

The acting marks the true high points of this production, though some choices in set and costume design make this “Tempest” fall short of greatness.

With their usual sense of the moment, Oakland Theatre Project delivers a Shakespearean tale that illuminates the delusions of a power-mad ruler. OTP’s “Tempest” brings current events into sharper focus.