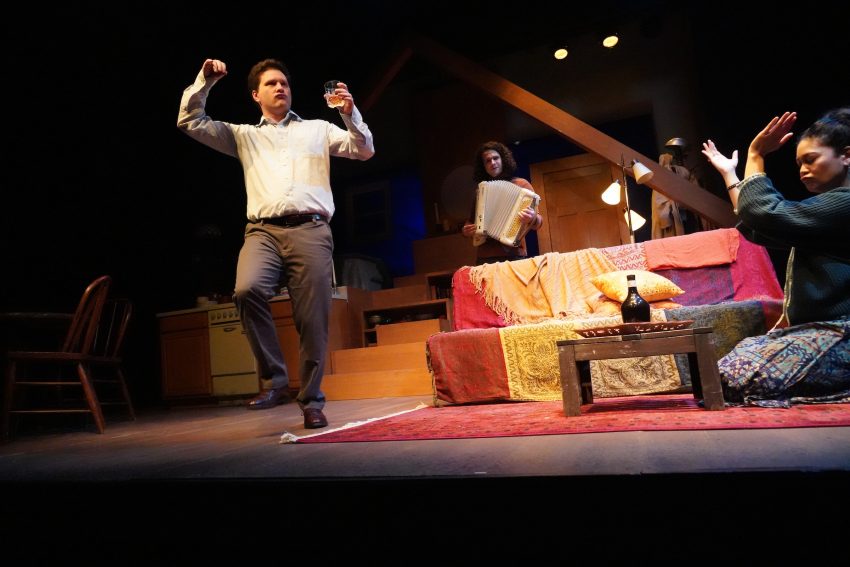 “Red Winged Blackbird” transcends a debate between Old World Judaism and New Age Buddhism. We meet two brothers, a medical student and a hippie, who try to break out of conformity to find a new life. Like the red winged blackbird totem, they display their beating hearts on the wing.

But the shadow of Huntington’s Disease looms large over their family. As their mother Eva (exquisite Danielle Levin) contorts her arms painfully, and cries out in Yiddish, we are mesmerized by her disease. Nevertheless, Levin evokes grace and beauty in her movements thanks to Bridgette Louriax’s subtle choreography.

Eva’s sons have suffered for years alongside their mother’s dementia. They live in constant fear of the 50/50 chance of inheriting the terrible disease.

As Alyosha, Aaron Wilton embodies the dutiful brother who is studying medicine—and aches for his father’s approval. Wilton strikes gold as a practical, modern high-achiever, who also defends Jewish tradition. His convincing, confiding conversation wins us over from the start.

As his rebellious younger brother Joshua, Adam Magill uses meaningful silence to convey his suffering. Joshua faces depression, calling it a spiritual crisis. So, he takes off for India, trying to transcend “hippiness” by a compelling spiritual quest. When Joshua gives his personal journey priority over other people, we feel doubts about him.

Designer Nina Ball’s multi-level set wonderfully depicts a cozy house with comfortable rooms. In their family home, Alyosha and Joshua embody the conflict between obligation and individuality. With an otherworldly touch, Ball uses a circular, illuminated mirror as a Buddhist shrine to elevate a mysterious Zen monk.

When Joshua tries to say a simple “goodbye,” his father Sidney (passionate Julian Lopez-Morillas) proclaims, “What do you know about Goodbye?” We are swept away by Sidney’s magnificent rebuttal of Joshua’s selfishness. Lopez-Morillas delivers a sharp retort, recounting the murder of his five brothers by the Nazis. Lopez-Morillas beautifully evokes our sympathy and caring.

Also supporting Joshua, quick-witted Rinabeth Apostol charms us as his partner Padma. She’s tough enough to puncture Joshua’s pretensions and Alyosha’s pragmatism, but she could be included more in their changes.

Playwright Alyosha Zim opens himself to us: we feel the pangs of brotherly love and strife. True to Zim’s life, or not, these basic struggles between practical living and fantastical pursuits ring true. Whether we identify with the doctor or the dreamer, Zim delightfully depicts the youthful search for identity.

Finally, we take part in a spiritual dance that unites the warring sides of brothers, religions, and generations into a compassionate reconciliation. The ending challenges belief, but “Red Winged Blackbird” ventures a rare and touching exploration, melding opposing world-views into enthralling revelation.