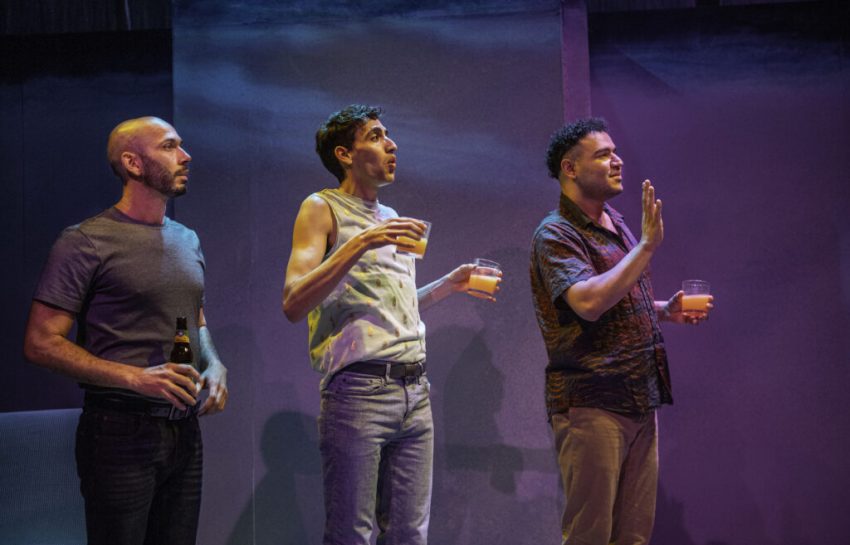 “Drowning in Cairo” dramatically reenacts an actual event in 2001, when Egyptian police stormed a gay party on a Queen boat on the Nile. They arrested 52 gay partiers who were tortured, jailed, and exposed in the newspapers—even though that’s illegal in Egypt.

Hatred of gay people is still happening. Authoritarian leaders are thriving. Adam Ashraf Elsayigh’s play reminds us of brutal regimes here and abroad.  It’s no holds barred when it comes to gay people—gay life has always been pursued and punished—laws or no laws.

“Drowning” reminds me of the 60s when San Francisco Police were still raiding gay bars and hauling people to jail. They put names in the SF Chronicle, and people lost their jobs here, too. You know what happened to Harvey Milk and Mayor George Moscone—both murdered in their City Hall offices.

Elsayigh unfolds the crisis of Arab Spring in the lives of three young Cairo gays. Two are connected to a wealthy political family—one comes out, one lies. Director Sahar Assaf has energized three sterling performances by three top-notch actors.

Moody, an out gay writer, is haunted by the break with his family.  El Gamal makes him painfully honest, immediate, and sympathetic. He risks his life to speak out—as we follow his story back to its origins. Our hearts warm to delicate, sensitive Moody as he squirms to please others while declaring his independence.

Moody, the beating heart of the story, learns to act bravely when attacked. His two friends circle around him—but fear the heat of his brilliant flame. His honesty is dangerous.

As Moody’s closeted boyfriend Khalid, mesmerizing Strasser evokes shame, fear, and cowardice. Khalid abandons and then returns to Moody, repeatedly. Khalid, a politician’s son, gets bailed out by his father and turns against gay life. He becomes a policeman, enforcing anti-gay laws on his former friends–in a chilling betrayal.

Khalid’s straight/gay confusion leads him to violence and betrayal—as he marries and has a son. Strasser’s sudden, thoughtful starts and stops reflect the blinding fears of a self-hating policeman, convincingly. When Khalid bursts back into Moody’s life, it’s a dramatic bombshell that reveals, slowly and seductively, Khalid’s true feelings.

In fascinating flashbacks, Taha, a street boy, observes  the early love affair between Moody and Khalid. Taha is just beginning to learn the devious ways of the privileged. He is 17 years old and is thrown into juvenile jail for three years. Taha escapes the confines of Cairo to become a human rights activist—with a dubious morality.

Playwright Elsayigh provides enough drama for several plays. But Moody and Khalid form a burning core that fascinates. How can Moody deal with this closeted, dangerous cop? How can Khalid live so many lies? “Drowning” pays attention to conflicts that afflict us all.

I enjoyed following these wonderful, intense lovers as they struggle to achieve independence, protect each other, and express their love. These three make a real and inspiring case for treating people honestly, rather than operating from deeply imprinted fears.