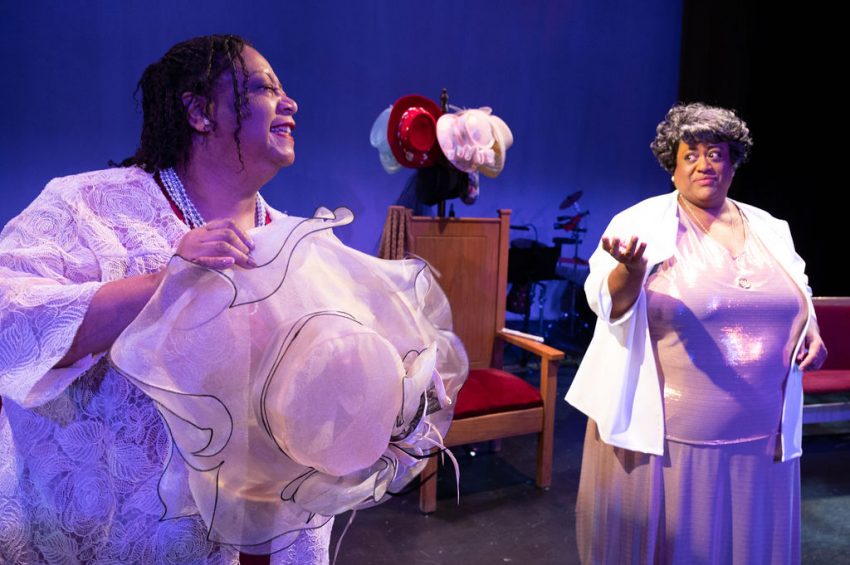 “Crowns” illuminates the resilience of the African American spirit though the magic of hats.

Each historical scene presents its corresponding hat, joining the past with the present in song.

Young Yolanda (Amora Brown) is sent by her mother to a small South Carolina community to meet her feisty Mother Shaw (dynamic Juanita Harris). Yolanda, confused and saddened by her brother’s murder, is leery about her grandma and her hat-wearing, gospel-singing friends.

Mother Shaw and her friends unite to challenge Yolanda’s and our understanding of Black history’s soul.

“When I Rise,” sung by magnificent voices, begins our beautiful journey. We learn that slaves first congregated in churches, adorning their heads with hats, out of respect for the Lord.  They wear their finest dresses, colorfully recreated by costume designer Nia Jacobs.

In a hand-clapping version of “When the Saints Come Marching In,” and the gospel song “Marching to Zion,” we feel how religion permeates their lives.

Versatile powerhouse Chris Poston plays all the male characters, including Pastor and Mother Shaw’s husband. Poston shares the women’s “Hattitude.” He struts across the stage wearing the hat of the hour, singing “I’m Gonna Roll On.”

In her rich voice, schoolteacher Wanda (brilliant Brittany Nicole Sims) brags, “I have over two hundred hats!” Provocative Jeanette (charming Alana Wagner) confides, “A woman can really flirt with her hat.” Each woman, wearing a hat that sparks memories, recounts the lives of ancestors who worked the tobacco and cotton fields for white masters.

Yolanda begins to sense the hidden identities and strengths of the hat culture. When she turns her red baseball cap sideways, she says, “I chose to look that way, and that gave me a sense of power.”  Her voice is often soft, overwhelmed by the company. I would have liked to hear her voice more clearly.

Lovely Velma (multi-talented Leslie Ivy), a funeral director, struggles with burying many of her people, especially women in wide-brimmed hats. As she sings the touching “His Eye Is on the Sparrow,” her virtuoso voice floods the theater.

The ladies cajole and tease each other, keeping our spirits light. But they also expose solemn truths: “Hats are like people. Sometimes they reveal, sometimes they conceal.”

“Crowns” is a musical jewel to be shared, a reminder that through story, song, and spirit, African Americans have preserved a shared cultural heritage for future generations.