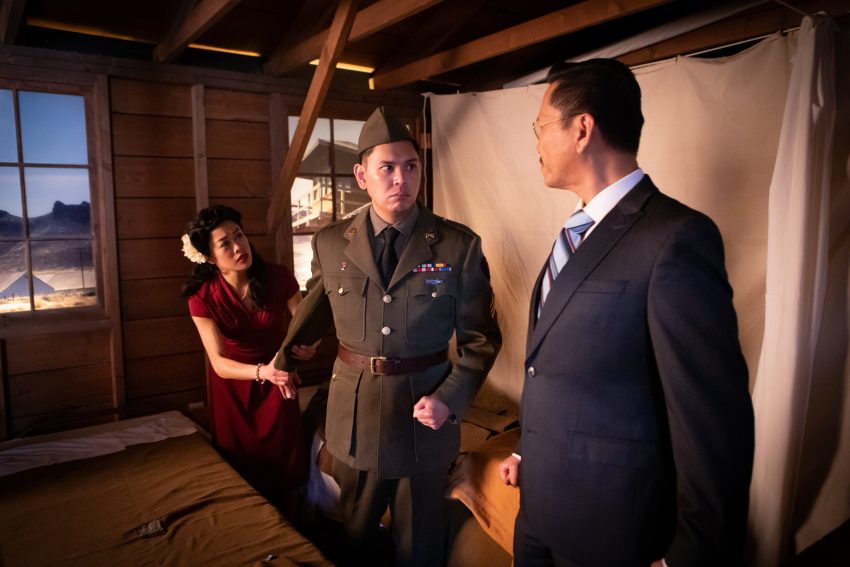 From the opening scenes, I was almost moved to tears by this drama inspired by the true-life experiences of TV/film actor George Takei. “Allegiance” tells the story of his family’s internment during WWII—80 years ago, when Japanese Americans were removed from their homes to camps by President Franklin D. Roosevelt’s Executive Order 9066.

And then, there’s the singing and dancing! The dancing and choreography in general are first rate. Kudos to Choreographer Nicole Tung.

One of the strongest themes in the musical points out that Japanese men were not united in their feelings about the insult. Those like Sammy Kimura (energetic Jomar Martinez) want to prove their patriotism by enlisting to fight. They were, after all, Americans born in California, who had never been to Japan. In “What Makes a Man,” Sammy sings:

It’s time we took action
And found a way out of this place
I’ll set an example
Help others see beyond race.

Others, like Frankie Suzuki (simmering Christopher J. Sotelo) were so outraged by the wrongness of the internment that they refused to be drafted, resisting at every turn. Frankie sings his anthem in “Resist.”

Scenic Designer Skip Epperson has done a lot with little. The spare set with wood supports and beams gives the sense of a barracks, providing all that’s needed. I was particularly struck by a scene where the cast is on a simulated train platform at the rear of the stage, waiting to be taken to the camp. The rattle of the train passing and its movement in a projection contribute to the feeling of being there—a terrific collaboration between Lighting Designer Edward Hunter and Sound Designer Brandie Larkin.

A second theme, shades of “South Pacific” here, is the taboo love interest between races. Army Nurse Hannah Campbell (conflicted Corinna Laskin) and Sammy are clearly attracted; and after a bit of vocal sparring, discover the charms of each other. Their song “I Oughta Go” is full of banter that culminates in Sammy’s leaving with cough medicine for his grandfather (adorable Ron Munekawa).

Frankie Suzuki romances Kei Kimura (delicate Marah Sotelo) with the satirical song “Paradise,” culminating in their beautiful duet “Nothing In Our Way.”  Sammy frowns on their romance because he is at philosophical odds with Frankie.

Sammy is an enthusiastic organizer. He tries to get everyone in the camp to sign petitions for their basic needs and recreation. They conclude that everyone loves baseball! Jay Kuo’s music and lyrics particularly lift our spirits in the number “Get in the Game”:

We’re stuck
Who knows how long?
And sure, it’s wrong
Alone it’s really hard
But as a team we’re strong
There’s no use placing blame
We just gotta get in the game.

It is important that this story is told and the truth becomes better known. The Japanese American internment was a terrible injustice.