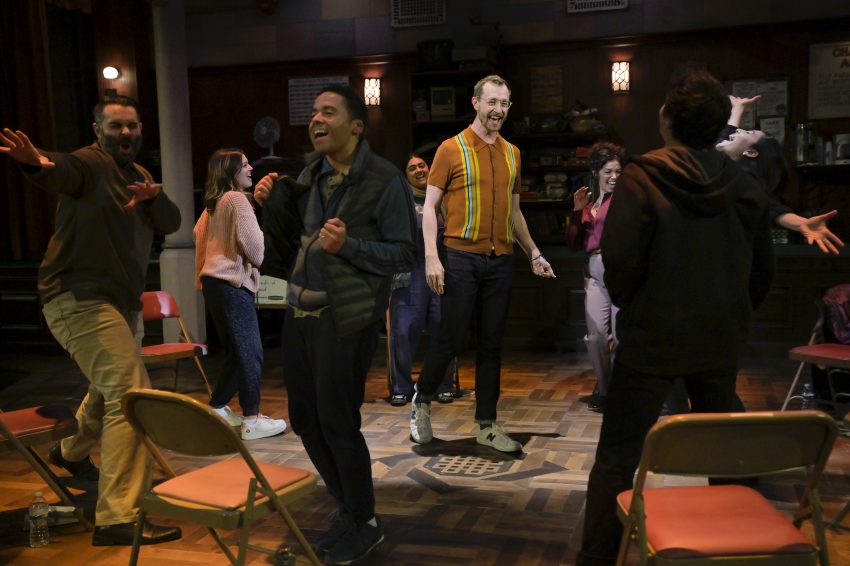 Dave Malloy has gathered us at Berkeley Rep with his musical show from Signature Theatre in New York. We find ourselves in the basement of a church for a 12-step meeting where eight singers give up their phones and confess, “Hello, my name is Edward and I’m an addict.”

And then they spill their guts in that “safe space.”

Director Anne Tippe deftly translates Malloy’s chamber musical into a graceful series of musical confessions. When they sing, each starts with a simple pitch pipe, then grows to rival Bach or Beyonce, transporting us to musical heaven.

When they all raise their voice in “Hymn: The Forest,” we hear the beauty of life before internet addiction. But fear enters the spartan basement and an unexpected “Monster” changes lives:

Addiction, obsession
Insomnia, depression
and the fear that I’ve wasted too much of my self
on rapid and vapid click clicks

The group harmonizes angelically, under the leadership of confident Paula (transcendent Isabel Santiago) who sets up the chairs and the rules. Paula explains that a mysterious organizer called Saul, their presiding spirit, has set up the meeting.

Jessica goes down the rabbit hole, discovering that “All the memes and posts…make me feel more shitty.” She digs deep into her self-flagellation.

“Octet” offers a 90 minute exploration of despair and addiction. The witty, and brilliant language, coupled with rhythms and tunes for each actor/singer form a chamber opera built on deformation.

Henry (elegant baritone Alex Gibson) takes us into a hectic candy underground where he battles with sweet seductions.We are ready for  revelations when Henry , who is cutting back on screen time with his new boyfriend, naively tells his tale of fixation. Graceful Henry is addicted to Candy Crush and all kinds of sweets:

The others join in and echo his fate, harmoniously—a comic treat. Henry admits, “At work I do it sneaky.” Each additional story adds weight to horror, as we grow to love these addicts, singing about “Obsessive/Compulsive/Disorder.”

Shy Velma (intriguing Kuhoo Verma) is addicted to tarot cards and spirituality—she has doubts, comes in late, hangs back until the end—but what an ending! She has the spotlight to herself and her singing pierces to the heart.

Velma leaves us in wonder and liberates us into self-possession. She’s an entire show in herself—full of musical and dramatic genius. Maybe the youngest can slay “The Monster.”

Karly (confident Kim Blanck), addicted to dating apps, chats with Ed (analytical Adam Bashian) who fruitlessly seeks a date: “I have no family / Women are repulsed by me.” In enchanting musical riffs, they explore gambling, dating, sex pics, and incel (men’s inability to get a date)—with mounting stakes.  Ed hilariously claims: “There is an erectile dysfunction epidemic.”

Tortured Toby (endearing Justin Gregory Lopez) has seen “beheading videos, hate groups, red rooms…” He has seen “the greatest monsters humanity has ever created,” wreaking havoc on his confidence. His turmoil and grace are as fascinating as his song.

The group constantly chimes in and adds timbre and tone to each confession, building a tower of companionship and shared strength.

As Marvin the scientist, J.D. Mollison strikes a new chord—in his startling spiritual experience in his lab. As a confirmed atheist, Marvin experiences a visitation that shatters his confidence. The devoted group follows into his sudden, inexplicable, dramatic vision.

Dave Malloy continues to find ways to make music and insights play back and forth. His “Octet” contains beautiful voices in trouble and temptation. Each suspenseful note vividly “refreshes” our power to cope with this old/new Monster.