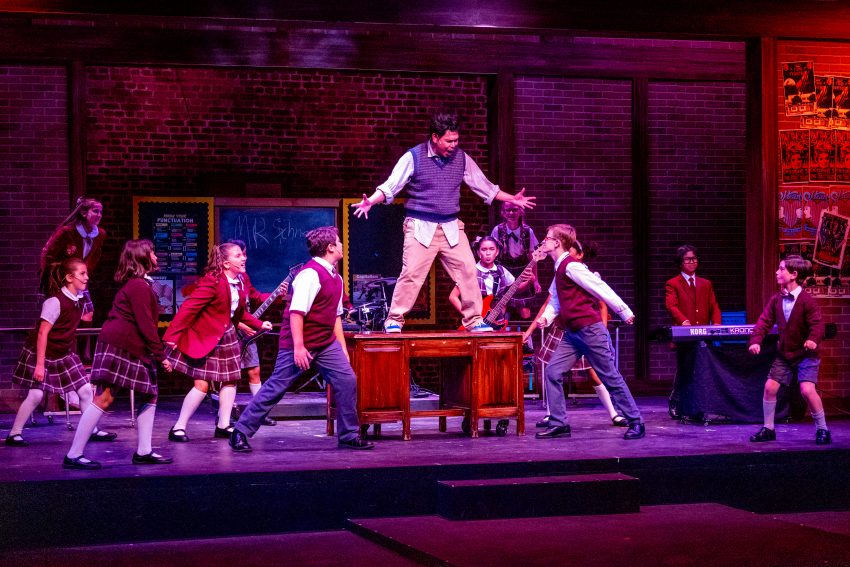 Take 15 fresh-faced young rock-star kids and let them all do their thing—playing musical instruments, singing, dancing and what do you get?

A guaranteed hit, that’s what!

Palo Alto Players’ production of “School of Rock,” based on the 2003 film of the same name starring Jack Black, is so darned watchable thanks to these charming youngsters and a pull-out-all-the-stops performance by Jomar Martinez as Dewey Finn, an aimless, out-of-a-job musician.

Dewey lives in the bedroom of a condo owned by his old bandmate, Ned Schneebly (likeable Zack Goller) and his fiancé Patty Di Marco (Amanda Le Nguyen). Patty demands that Ned throw Dewey out because he hasn’t paid his share of the rent for a long time. All Dewey does is sleep and occasionally try to land a music gig.

One day when Ned and Patty are out, Dewey answers a phone call from Horace Green School asking if Ned might be available to take on a long-term substitute teacher position for a salary of $2,600.  Suddenly, a light bulb goes on in Dewey’s brain. He really needs money and how hard could it be working as a substitute teacher?

He takes over Ned’s sub job—and that’s when fun begins!

The 15 talented kids are really the heart of “School of Rock.” Most are middle school and high school students, although several are still in elementary school. They’ve been performing in school or local theatre productions for years.

Four of the young musicians play solos on their instruments. As Zack, guitar-playing Rafael “Rafi’ Frans hits all the right notes—and practically brings down the house. Alex Pease (Freddy) rocks on the drums. As Lawrence, CJ Fernando is a virtuoso piano player. And Adeline Anderson as Katie shines on bass.

Choreographer Joey Dippel selected youthful cast members with dance experience to lead the numbers, but gives each of the pint-sized actors a chance to dance to the beat.

Unfortunately, “School of Rock” makes most of the adults in the cast seem like numbskulls. They’re caricatures of dull-witted people—a real contrast to the bright, talented kids.

Andrew Lloyd Webber composed “Rock’s” musical score, and Glen Slater provided lyrics. It has several memorable numbers, most notably: “You’re in the Band,” “Where Did the Rock Go?” “School of Rock,” and “Stick It to the Man.”

Costume designer Noreen Styliadis hits the mark with cute burgundy-gray-and-black plaid school uniforms that all the kids (except one) wear.  In the finale, she even dresses Martinez in an adult-sized version of the kids’ school uniform!

Personally, I found that the 2½-hour production zoomed by. Between a somewhat inane plot, over-the-top musical performances, and the earnestness of the cute kids, it’s definitely worth seeing!