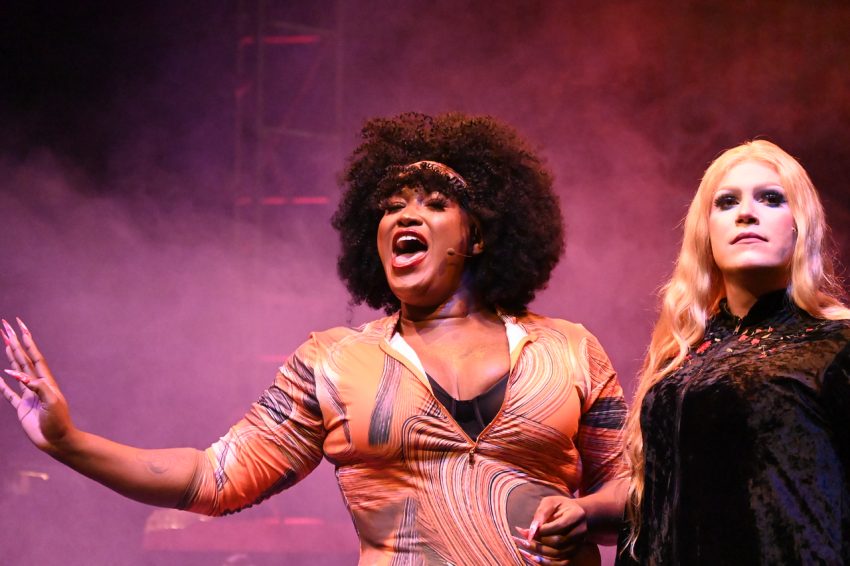 When will we realize that difference is not dangerous, but rather enhances and strengthens US. In “The Red Shades: A Trans Superhero Rock Opera,” Adrienne Price celebrates the trans and queer superheroes who fought San Francisco Police at the 1966 Compton Cafeteria Riots.

The four main characters are ordinary people who become superheroes when they demand trans and queer rights.

As Sheriff Lear, Adam KuveNiemann delivers an ominous and prophetic message to his deputies:  “I just had a meeting with the mayor and he’s counting on you to clean up this mess so we create a new San Francisco that attracts wealth and prosperity.”

“The Red Shades” takes us on a wild ride. I was awed by Adrienne Price’s deeply expressive music and powerful lyrics delivered by superb singers. Five talented musicians provide musical backdrop at centerstage.

Ida (Carmen Castillo), a troubled teen, escapes from backwards Lovelock, Nevada to “fabulous” San Francisco. Initially rejected, Ida meets three older trans who protect her. The more we come to know them the more we like them.

Turns out that the three trans friends have superpowers and, like Batman, come out of the dark to save the day. Their powers suddenly burst out to fight for queer and trans folks.

As a trans-teenager, Ida is hounded by family, doctors, and a mental asylum to go “straight.” In the song “For Her Own Protection,” Ida is attacked—asylum attendants come at her with a giant syringe.  Ida’s superpower happens spontaneously whenever she shrieks at top volume.

Chris Steele stands out as Genevieve, a tall imposing figure whose unrequited love provides a romantic subplot. These characters show deep love for each other but hate for prejudice and bigotry. Genevieve’s superpower is magic spells—the power of love.

The versatile ensemble fills multiple roles with energy and conviction. The genius of Costume Designers Nolan Miranda and Lyre Alston make their transitions seamless. The singers change swiftly from street people in black leotards to policemen with peaked hats and batons.

Designers Sarah Phykitt and JennyB of Shady Lady complement the wildly varying moods with tech and lights. However, I could do without the distracting fog machine.

The show was wonderful from start to finish. It leaves me wondering why we are so limited that we cannot allow people to live their own lives as God intended.