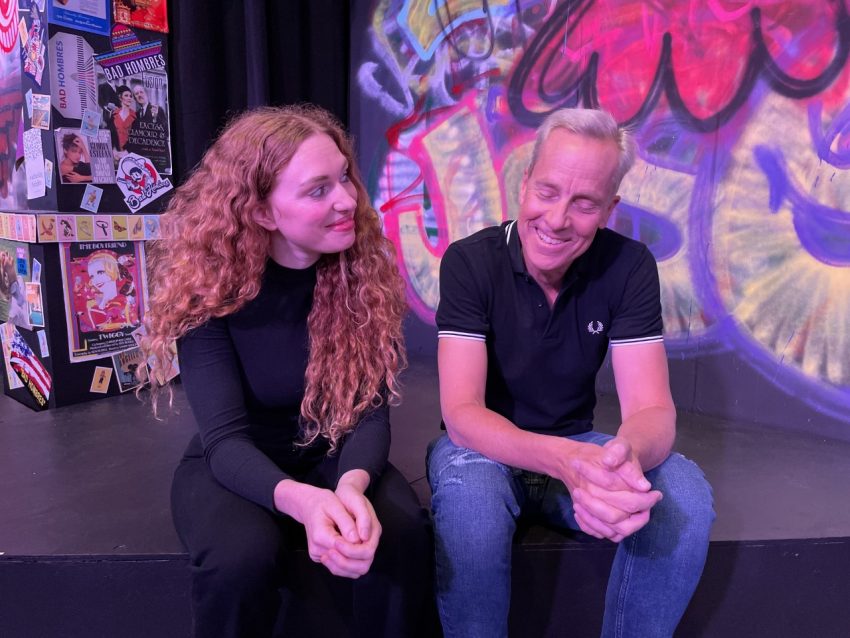 Theatre Rhino in the Castro is an intimate, warm, unpretentious space that expands our imaginations. Fisher asks the audience to supply dramatic sounds, involving us all.

As Jordy, Fisher sweeps us into a whirlwind adventure as he mounts a high ladder, playing the rear gunner in a funny WWII bomber skit.  The pilot is sex talking with Ben, his gunner: “Ben, Ben, Ben. Beg. Beg. Beg,” as hips swish around in circles.

Jordy’s long lost daughter Roxanne stops the skit cold when she enters and announces she is his 22-year-old daughter. She wants him to teach her how to act, and wants to live with him., too. Out of the blue, she recites Portia’s “The Quality of Mercy” speech from “Merchant of Venice” with surprising grace.

We are already impressed with her courage, and so is her father. But Jordy is anxious. How does a gay man handle a long-abandoned daughter?

They quip and quibble back and forth, sparring over sex talk and acting styles. Jordy finally admits, “Easier to perform for you than talk to you.” So, they grab scripts and act out scenes, communicating their lives through acting. Ingenious.

In each scene, they divulge greater emotional truths, sharing both joys and heartaches. Their emotional contact through acting creates a moving, intimate drama.

Roxanne was left on her own for years, so she pretended that her mom was alive. Recounting her trials in applying to Yale’s Drama Department, Roxanne admitted to the examiners:  “I’ve been acting all my life.”

Jordy acts out his meeting, two decades ago, with Roxanne’s mother. He loved her for her Stage Manager’s Binder, admiring her organizational genius. But his love hit the rocks, as she confided the anguish to her daughter: “Gay men who have sex with women are still gay men.” The mom called him a “half man”—a shocking accusation.

Fisher alternates their present-day confrontation with WWII battle scenes. As Jordy falls from a warplane into shark-infested waters, he struggles to survive—with remarkable acting by Fisher.

Roxanne falls into Alice in Wonderland’s dark rabbit hole where she also struggles to survive in a fantasy world. Like Alice, Roxanne grows and shrinks as she has emotionally throughout her life. The adroit Mays’ talent shines as she swiftly switches roles in Wonderland. As Alice, Roxanne mimics the Red Queen: “Everyone is mad in all directions!”

In a charming “Alice” scene, Roxanne orders Jordy to hop like a rabbit. Fisher’s hopping had me laughing out loud. When Jordy amicably complies with her direction, they are united in the same fantasy. Soon, we find themselves in an other-worldly vision that will surprise you.

“A Slice of Life” is more than a gay parenting story. It’s a wonderful relationship where two people slowly dissolve their masks to engender understanding. Do not miss this gem.