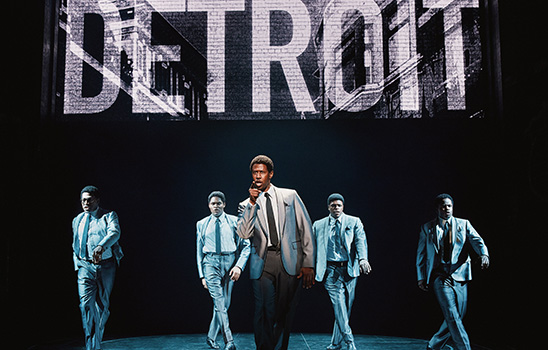 From the first beat, “Ain’t Too Proud—The Life and Times of The Temptations” lifts us out of our seats. It’s a trip down a memory lane of music with this fast-paced story of the 60s magical quintet. By the end we were all on our feet clapping and dancing, shouting and waving.

Playwright Dominique Morisseau has skillfully selected key elements from Otis Williams’ memoir to paint a vivid picture of the group’s meteoric climb up the charts, showing  how the members handled their success.

We hear more than 30 of The Temptations greatest hits, from their beginnings in Detroit as The Elgins, through many iterations in Berry Gordy’s Motown empire. Otis Williams (sincere Marcus Paul James), the last of the original Temptations, tells the touching story of their rise and fall.

The other four Temptations were Paul Williams, all around best singer; Melvin Franklin of the deep bass voice; Eddie Kendricks with an amazing falsetto; and David Ruffin with his incredible dance moves.

Against historical backdrops of Martin Luther King’s civil rights marches and the protests against the Vietnam War, our five rising stars struggle between marching or continuing their push to reach the top. “The music is color blind,” defends Paul Williams. “But the world isn’t!” declares Otis, when their attempts to tour in the South prove too dangerous to continue.

Choreographer Sergio Trujillo has our quintet making all the right moves. And Elijah Ahmad Lewis’ David Ruffin leaves us in awe of his splits—like the real Ruffin. Diana Ross and The Supremes did not move as vigorously as they do here; but all of the dancing is rocketed into the 21st century. This show goes far beyond the “Temptations’ Walk”!

The Broadway production gives new meaning to “larger than life.”  The shifting Civil Rights projections, spotlights panning the audience, and props gliding smoothly on tracks all make for an exhilarating, non-stop experience.

After hard scrabble efforts to pull the band together, The Temptations face rising egos, and jealousy. David Ruffin sought the spotlight and wanted to rename them: “David Ruffin and The Temptations.”  His drug use led to exile! Yet, so great was his attachment to The Temptations, he turned up at their shows, grabbed a mic, and performed.

This brotherhood of singers had trouble with their personal lives—caring more about stardom than their families. As much as Otis protests to Josephine that he loves her and Lamont, he’s not there. When his son dies in a work accident at 23, Otis sings, “What Becomes of the Brokenhearted?” as we draw to the end of his narration.

But we’re not sent off into the night on a sad note. The show wraps up with joyful singing and dancing with the live band emerging from behind the curtain.

Go see this exhilarating show celebrating these amazing talents and look around at the audience. You’ll see an amazing mix of people and cultures proving perhaps that the music really is colorblind.

“Ain’t Too Proud—The Life and Times of the Temptations”—book by Dominique Morisseau, based on The Temptations by Otis Williams with Patricia Romanowski, music & lyrics from The Legendary Motown Catalog, directed by Des McAnuff, by BroadwaySF, at Golden Gate Theatre, San Francisco. Info: BroadwaySF.com – to December 4, 2022.