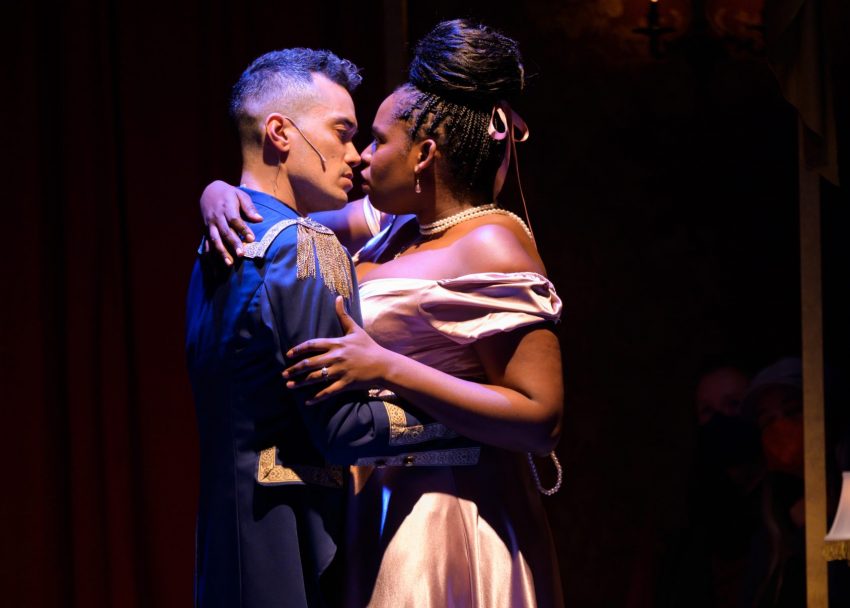 You are encouraged to order a decadent cocktail before finding your seat at “Natasha, Pierre & the Great Comet of 1812.” Shotgun’s stage has been transformed into a swanky set—part “wild night at the opera,” part “quiet evening at the club.” Having entrusted our husbands with bedtime and feeling giddy at the prospect of being out at all, my date for the night and I indulged.

I brought Faye, a fellow mother of two young children, to this show because she loves music and holy smokes did we get music! Each member of this strong cast has a fabulous and unique voice.

While depressed Pierre (Albert Hodge) waxes philosophical about what he calls his “wasted life,” we hear hints of gospel and jazz. When Natasha Rostova (Jacqueline Dennis) professes her love, first for absent Prince Andrey and then for Anatole, the vocal dynamics range from high and sweet to throaty and full.

As Anatole, Nick Rodrigues’ solos are delightfully smarmy, Sonya’s honeyed and moving. And don’t even get me started on the pit musicians. They are a superb addition to the choir-like cast. All together, this musical powerhouse commands our attention from first note to last.

A word of warning to those expecting a more modern experience of songs interspersed with acted scenes. Dave Malloy has composed an ostentatious sung-through musical—all the lines are sung. The actors sing their innermost feelings, their physical reactions, and even their own entrances and exits–making high comedy in unexpected places.

Based on a love story in Tolstoy’s War and Peace, the show takes great liberties with modern lingo, decadent characters, and outrageous plot. The singer-actors expertly use their voices, their emotions, and their bodies to convey pain, rage, joy, hope, and utter frivolity.

The war ends up an afterthought in the distance, as Napoleon invades the Russian homeland. Instead, the drama revolves around the young, naïve Natasha, admired for her beauty, innocence, and standing. Like Moscow, itself, she becomes the object of a ruthless, aggressive invader.

There are uproarious moments of slapstick comedy, many involving audience members seated close to or on Designer Nina Ball’s creative and unconventional stage. When the set becomes a dueling ground, we feel moments of tense drama. When it becomes Moscow on the fateful night the characters glimpse the Great Comet of 1812, the stage becomes intimate and magical.

Repeatedly, the theme rings out: “There’s a war going on out there somewhere and Andrey isn’t here.” How easily the public forgets the wars because the wealthy and powerful can wage them by proxy. I’m reminded of our own wars in Afghanistan and Iraq.

As a National Guard soldier who turned conscientious objector, I felt the old stabs of indignation. At the height of the so-called “War on Terror,” most Americans could not be bothered about the war “out there somewhere.” The Russians in Moscow also avoided the war, until they had to hastily abandon the city ahead of Napoleon’s advancing army.

No need to have read War and Peace to enjoy Malloy’s musical spectacle. It’s as accessible as they come and loads of fun. The show is extended into mid-January to keep up with high demand for joy in darkness.