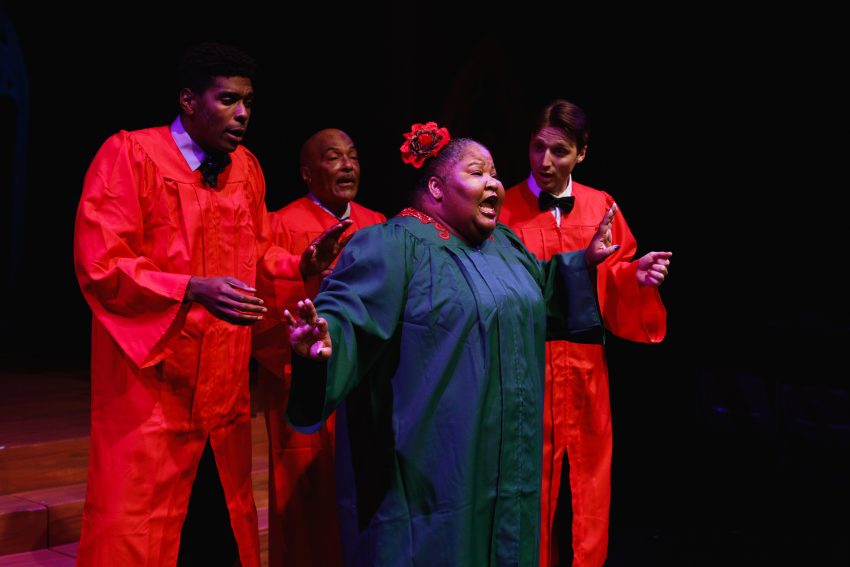 In “HALIE! The Mahalia Jackson Musical,” co-writers Wendy E. Taylor and Darryl V. Jones dramatize the life of Mahalia Jackson, the most gifted Gospel singer of all time. She influenced all the music around her:  Blues, Rock n’Roll, Pop—they all incorporate Jackson’s breakthrough Gospel songs and her rock-solid faith.

As played by the mellifluous and charming Jeannine Anderson, Mahalia deals with a troubled childhood by clinging to her Christian faith. She continues to hold onto her faith through the Depression, WWII, and the Civil Rights Movement. In 1950, she finally performs at Carnegie Hall–the first Black woman to sing there.

In the witty opening, Darryl V. Jones, Rodney Earl Jackson Jr., and Sam Faustine talk with God about sending an angel down to earth—Hailie is that angel.

Mahalia faced down segregation, misogyny, and hatred. She rises above abuse and racism, keeping her “Eyes on the Prize.” She finds the Johnson Brothers who team up with her, sharing their common Christian faith. They tour for decades. With Jones and Faustine singing along with Anderson, they take us to concerts around the world. Mahalia faces adversity, yet she becomes our preeminent Gospel singer.

Backed by Jones and Faustine, effervescent Anderson sings hits as her life unrolls. Jones displays his  masterful dramatic talents in many roles, shining as her husband who turns out to be a gambler at her expense.

This musical drama of her triumphs is backed by emotional news photos, right up to her friendship and alliance with Martin Luther King, Jr. in the 60s.

Once you hear Jeanine Anderson sing as Hailie, you will never forget her voice or her message.

Anderson does an amazing job of embodying Hailie’s gospel sound. Whether she’s singing “Let the Church Roll On,” “Old Time Religion,” “On My Way,” or “Keep Your Hand on the Plow,” Anderson’s voice shakes the rafters.

Her lively, new agent Joe Bostick (talented Rodney Earl Jackson Jr.), gets her into Carnegie Hall and brings her voice to the world. Mahalia broke so many barriers of oppression that we can hardly count them. As Bostick, Jackson Jr. dances and sings brilliantly—a show in himself.

Back in Chicago, her good friend the radio philosopher Studs Terkel faithfully plays her records on his radio show, bringing millions of new fans to her door. As Terkel, Faustine adds a warm, affectionate presence, dancing and singing with flawless musicality.

The super-talented foursome delivers the goods, telling the story of American music and life from 1911 to 1972.

The world of music has incorporated her sound—from jazz to pop to rock. Mahalia brings us heavenly music and spiritual refreshment.

Mahalia Jackson influenced Tina Turner, Aretha Franklin, James Cleveland, many others, who rejuvenated our music. “Hailie!” shows the world transforming in front of our eyes. Mahalia Jackson is still with us, now and forever. Bless her!