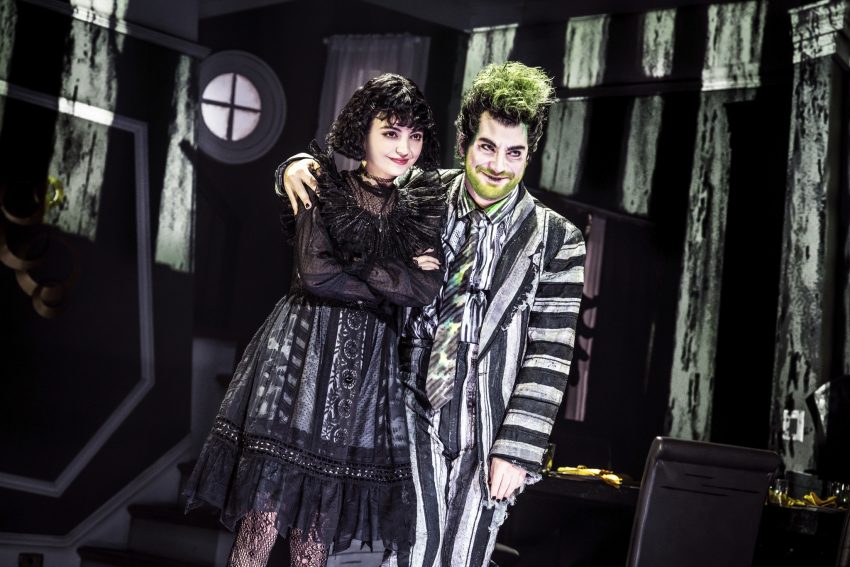 “Beetlejuice, The Musical” is crass and boisterous, and shatters the stage’s fourth wall entirely. But isn’t that the heart of theater? Big, swooping acting, singing your lungs out, and dancing like nobody’s watching. “Beetlejuice” sports neon strobe lights and sexual innuendos, along with a loud, commanding series of songs.

Early in its career, the show was saved when a young audience found it on TikTok, and now, “Beetlejuice” is playing to eager audiences at BroadwaySF. If crass comedy is your thing, you’ll be rolling in your seat.

The show builds on Tim Burton’s classic 1988 movie with stunning special effects. Director Alex Timbers uses his big budget to bathe the stage in vivid projections, painting the house in hues to match the moods. Gigantic black and white puppet snakes slink from backstage and pyrotechnics are sprinkled throughout—overall, a theatrical marvel.

The Maitlands, a young suburban couple, Barbara (Britney Coleman) and Adam (Will Burton), seem to be a cookie-cutter nuclear family; but they don’t have kids. In the comedy tune, “Ready Set Not Yet,” they come up with every excuse imaginable to avoid admitting they don’t even want children!

The Maitlands bring a comical, edgy satire, as we laugh along with their deconstruction of the ‘normal’ family. When their lives come to an end along with the song, they find they have an eternity to haunt their well-worn house, and decide what family means to them.

Sharp angles jut out from the brash set design and crudely drawn swirls cover the plush purple curtains, adding to the surreal aura of the musical. Corny at best, outlines of bats in flight and fall imagery adorn the curtains during scene changes, drawing attention to dead time.

Clad in a frilly, black dress, teen-aged Lydia (radiant Isabella Esler) moves into the Maitland’s old house with her father Charles (Jesse Sharp) and life coach Delia (Kate Marilley). Esler delivers a wonderful performance in her professional debut. Mourning her mom, and her own disconnection from the world, Lydia gently draws us in with her opening ballad “Invisible.” Delightful, expressive, and with the right amount of snark, Esler is the emotional backbone of “Beetlejuice.”

As off-putting as his striped suit and green hair, Beetlejuice (smooth Justin Collette) is a wise-cracking, perverted specter haunting Lydia’s new house. As the titular character, Collette has most of the crass comedy, but none of the heart. Despite Collette’s charismatic performance, the character remains deeply unsympathetic.

The musical really shines best when it comes to the connection between Lydia and Beetlejuice. When they sing “Say My Name,” an energetic duet, they spark a lively rivalry. As the power dynamics shift back and forth, we get to enjoy a toned-down version of Beetlejuice’s endless mania, while also letting us revel in an up-beat Lydia.

Brimming with humor, “Beetlejuice” offers a darned good show. Although it arrives a little late for Halloween, it’s just in time to take your daring loved one for a spooky Christmas ride.