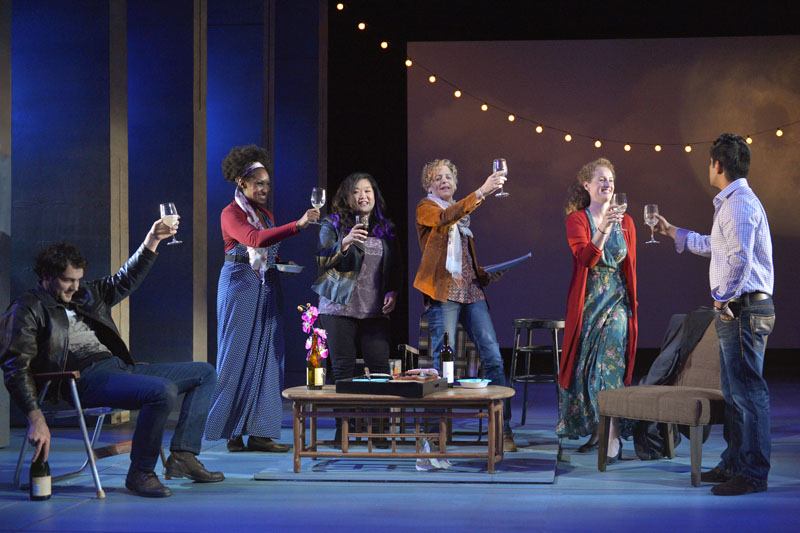 Many millennials have a tendency to  assert  their “truth,” impatiently, like angsty preachers who get silenced by other soapbox orators. Tom Stoppard’s “The Hard Problem,” in its West Coast Premiere at the American Conservatory Theater, proves to be a delight for youthful questioning minds. The playwright forces us to analyze both sides of the conflict between religion and science. Director Carey Perloff offers us Stoppard’s educated alternative to mere dogmatism.  “The Hard Problem” relies heavily on serious dramatic debate, while also taking us on a scientist’s emotional journey.

We follow the career of Hilary (a spirited Brenda Meaney), from undergraduate dreamer to researcher in psychology, who expresses her belief in God. The play begins with her talking with her psychology tutor, a bad boy evolutionist called Spike (a witty, seductive Dan Clegg). He is coaching her for an interview at the Khrol Institute for Brain Science. Hilary expresses her optimism about the existence of God and about the human capability for altruism. She believes that genuine selflessness on behalf of other people exists in the world.

Her belief nearly short circuits Spike, brewing division between them.  They debate whether faith and science can mingle in modern times. They debate basic questions: Is there a separation of body and mind? Can humans be purely “good,” or are we just in pursuit of the best way to pass on our genes?

Despite their difference of opinion, they continue to enjoy sex. Their stark contradictions lead to opportunities for tongue-in-cheek humor, Stoppard style. Overflowing with sly sexual references to natural selection, we have to ask ourselves: Does Hillary really want to sleep with Spike out of sexual attraction, or is she trying to move our species forward?

In a post-coital scene, as Hillary prepares for bed, Spike discovers her on her knees praying to God. The moment changes everything between them because we finally realize that she practices her faith by actually praying! He is shocked.

Hilary refuses to back down to her male counterparts. Her beautiful red hair and statuesque physique embody her optimism. Spike, a handsome know-it-all insists on being right and shoving forth his pretentious ideas. But, she fights them with vigor. She becomes a strong-willed female scientist who refuses to give in to her overbearing male counterparts. Although they intellectually argue, Spike genuinely cares about Hilary. Beside the fact that he staunchly opposes the validity of altruism, he is also living proof that altruism can exist.

“The Hard Problem” seems to have an emotion problem. Hilary’s relation to Spike hardly draws us into feeling any sympathy for either of them. Her closest emotional tie rests with two abstract concepts: God and altruism. Hilary also avoids romantic overtures from her academic advisor, Leo (a stoic Anthony Fusco). Nor do we relate to the manic billionaire owner of the Krohl Institute, Jerry Khrol (a dominating Mike Ryan).

Stoppard writes striking, witty dialogue, but these heady characters can slip away from us. The play offers us complex fast-talking collegiate banter. I felt as if I was still trying comprehend the last jest or loaded statement, while Hilary or Spike rattle off another brilliant quip. Stoppard includes edgy jokes about sexual selection, and elaborate metaphors for the brain’s grey matter, comparing the brain to the London subway system.

In “The Hard Problem,” Stoppard  discusses the Bank Crash of 2008, the greed of the financial industry, and our cruelty to animals. The once overzealous graduate student turned hedge fund manager, Amal (a boisterous Vandit Blatt), serves as Stoppard’s spokesman to expose these issues. At one point, Amal explains his support for animal testing because “they don’t sue.” He is a narcissistic social climber who adds controversy and flare to the production. His obsession with personal gain serves as the clear counter example for Hillary’s altruistic optimism.

The play’s intellectual platform offers a unique experience. “The Hard Problem” may not be a nail-biter, but it keeps your brow furrowed. I walked away with a very busy brain, wondering if these ideas could be realities.