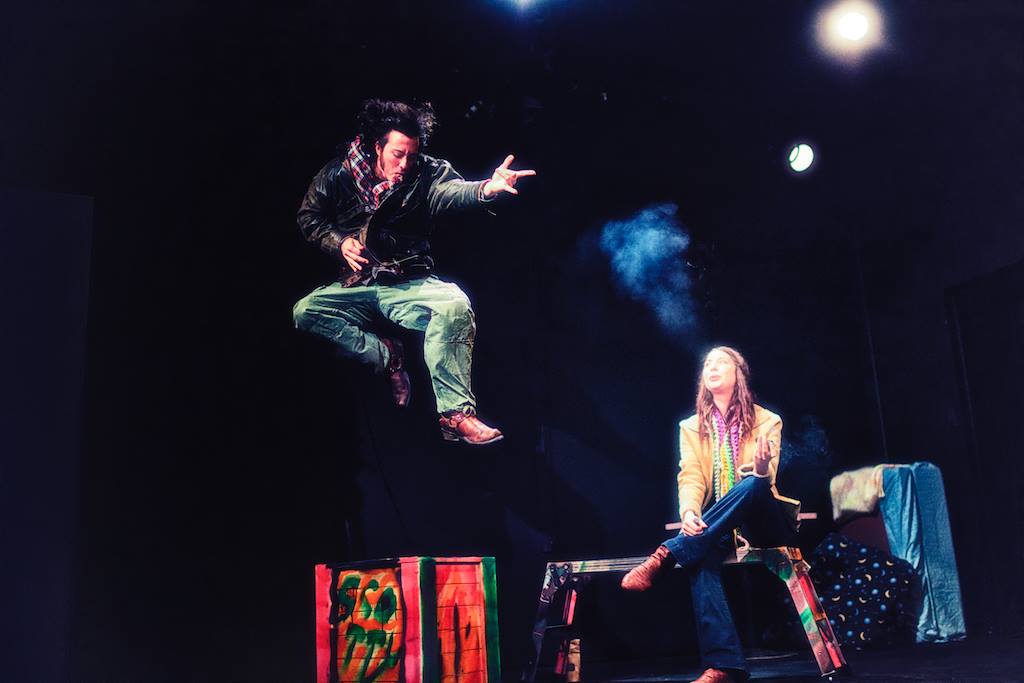 Searching for Soul in the Seventies

Set in 1978, soon after the Jonestown massacre and the death of The Who drummer, Keith Moon, “Black River Falls” by Bryn Magnus takes a hard look at one desperate family in the small town of Black River Falls, Wisconsin. Magnus exposes the anxiety of U.S. teenage lives in the downer 70s, while the characters suffer violence, lust, and abandonment.

“Black River Falls” focuses on Gary’s (Brian Smick) return from a hunting trip on a hunch that his sister Laurie (Gabby Rose) might need help. Gary’s father (Benjamin Latham), the quintessential Midwesterner, remains numbingly content with a case of beer and football on TV.  Directed by Scott Ragle at Mojo Theatre, this deliberately spartan production is open to competing interpretations. Laurie and Gary’s father is passive and ambivalent about the welfare of his children. Another student in Laurie’s class, Craig (Donovan Rogers), stumbles downstairs in disheveled clothing and sheepishly explains that Laurie and he have been working on Moby Dick. Suddenly, Laurie transforms from a quiet bookworm to an anxious and cynical young woman. She shivers and holds herself, her body language indicating embarrassment and distress.

Despite Laurie’s refusal to return to her room, neither her father nor her brother take note of her crisis. The local bartender (Scott Baker) first addresses Laurie’s behavior when he warns Laurie’s father about Craig.

Laurie’s depression leads her to suddenly lash out and puts Craig at the mercy of Dabney (Steven Westdahl), the town drunk. Although Gary defends his sister Laurie, he does not grasp the violation underlying Laurie’s silence. Gary comforts his sister, saying, “You are way better than a rock.” In “Black River Falls,” we are drawn by the simple interactions between characters who are inarticulate and wounded, casualties of post-war syndrome. While Craig is always loud and outspoken, Laurie is unpredictable and dangerous. Gary tries to  resolve his feelings with others, as his father drowns out the pain with more television and beer. These characters echo the emotional trauma from an era inundated by economic and psychological depression.

With every puff of smoke, we become lost in the haze of Alan Watts’ philosophy and reincarnation after drinking the Kool-Aid of death. Gary attempts to enlighten Colleen (Kathleen McHatton), but instead succumbs to her sexual charms. We are lost between his soul searching and superficial desires. The people’s lives in “Black River Falls” expose the lie at the heart of post-industrial and neo-colonial America. The broken backbone of the Midwest is the perfect places to encounter the high cost on U.S. families for economic exploitation and military misadventures. As a cautionary tale, “Black River Falls” opens our eyes to silenced American lives.